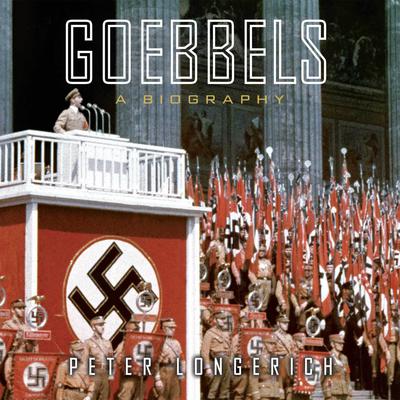 As a young man, Joseph Goebbels was a budding narcissist with a constant need of approval. Through political involvement, he found personal affirmation within the German National Socialist Party. In this comprehensive volume, Peter Longerich documents Goebbels’ descent into anti-Semitism and ideology and ascent through the ranks of the Nazi party, where he became an integral member Hitler’s inner circle and where he shaped a brutal campaign of Nazi propaganda.

In life and in his grisly family suicide, Goebbels was one of Hitler’s most loyal acolytes. Though powerful in the party and in wartime Germany, Longerich’s Goebbels is a man dogged by insecurities and consumed by his fierce adherence to the Nazi cause. Longerich engages and challenges the careful self—portrait that Goebbels left behind in his diaries, and, as he delves deep into the mind of Hitler’s master propagandist, Longerich discovers first—hand how the Nazi message was conceived. This complete portrait of the man behind the message is sure to become a standard for historians and students of the holocaust for years to come.

“Peter Longerich…has delved into rarely accessed material from his subject’s diaries, which span thirty years, to paint a remarkable portrait of the man who became one of Hitler’s most trusted lieutenants.” —The Daily Telegraph
Highly recommended for German, Holocaust, and World War II historians and readers, biography lovers, and those interested in marketing and propaganda history. —Library Journal (starred review)
“Longerich…a historian of modern Germany at Royal Holloway University of London, explores in depth three aspects of the career and life of the Third Reich’s infamous minister of propaganda…This biography is now the definitive work on Goebbels in English, and will be of major interest to scholars and serious students of the Third Reich.” —Publishers Weekly

Peter Longerich is professor of modern German history at Royal Holloway University of London, and founder of Royal Holloway’s Holocaust Research Centre. He has published extensively on Nazi Germany, including the acclaimed Holocaust: The Nazi Murder and the Persecution of the Jews, The Unwritten Order: Hitler’s Role in the Final Solution, and The Systematic Character of the National Socialist Policy for the Extermination of the Jews.