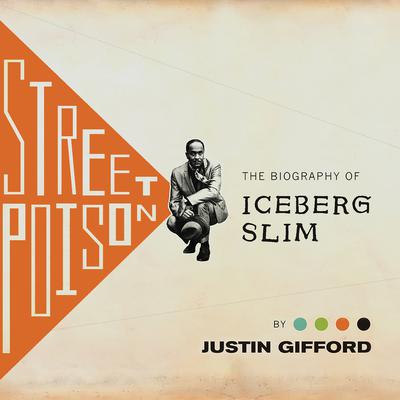 The first and definitive biography of one of America's bestselling, notorious, and influential writers of the twentieth century: Iceberg Slim, ne Robert Beck, author of the multimillion-copy memoir Pimp and such equally popular novels as Trick Baby and Mama Black Widow.

For a career as a, yes, ruthless pimp in the '40s and '50s, Iceberg Slim refashioned himself as the first and still the greatest of "street lit" masters, whose vivid books have made him an icon to such rappers as Ice-T, Jay-Z, and Snoop Dogg and a presiding spirit of "blaxploitation" culture. You can't understand contemporary black (and even American) culture without reckoning with Iceberg Slim and his many acolytes and imitators.

Literature professor Justin Gifford has been researching the life work of Robert Beck for a decade, culminating in Street Poison, a colorful and compassionate biography of one of the most complicated figures in the twentieth-century literature. Drawing on a wealth of archival material—including FBI files, prison records, and interviews with Beck, his wife, and his daughters—Gifford explores the sexual trauma and racial violence Beck endured that led to his reinvention as Iceberg Slim, one of America's most infamous pimps of the 1940s and '50s. From pimping his profoundly influential confessional autobiography, Pimp, to his involvement in radical politics, Gifford's biography illuminates the life and works of one of American literature's most unique renegades.

“Gifford’s taut biography is important and overdue.” —New York Times
“Gifford’s greatest achievement is placing Beck’s life within the context of larger social, political and economic changes.” —Washington Post
“By refusing to either idealize or demonize his subject, he succeeds.” —Boston Globe
“Gifford’s dramatic, hard-core, contextually dynamic, and powerfully affecting biography is sharply relevant to today’s civil-rights struggles.” —Booklist (starred review)
“Gifford transcends the opacity of academic writing in this lively account…‘This is not a story without tragedy…But it is a story of redemption and breathtaking creativity, too,’ writes Gifford, who not only tells the story well, but shows why it’s so significant.” —Kirkus Reviews (starred review)
“Thoroughly engrossing…In addition to lucid critical assessments of Beck’s published and unpublished works, Gifford offers a flavorful account of African American cultural and social history.” —Publishers Weekly
“A remarkably researched, fascinating life story…Gifford makes a strong case for the enormous popular appeal and the continuing widespread influence of Iceberg Slim.” —Library Journal
“Narrator JD Jackson’s performance gives this literary biography of Robert Beck warmth and animation…Jackson clearly delineates with both pacing and inflection the passages Gifford quotes from Beck. Gifford and Jackson pair well to realize Beck’s complex humanity and help listeners understand why he remains the recipient of homage in both street lit and rap.” —AudioFile