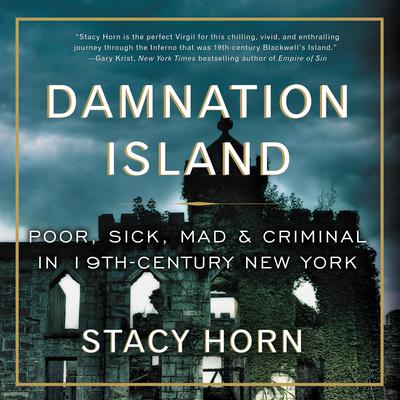 Today it is known as Roosevelt Island. In 1828, when New York City purchased this narrow, two-mile-long island in the East River, it was called Blackwell's Island. There, over the next hundred years, the city would build a lunatic asylum, prison, hospital, workhouse, and almshouse. Stacy Horn has crafted a compelling and chilling narrative told through the stories of the poor souls sent to Blackwell's, as well as the period's city officials, reformers, and journalists (including the famous Nellie Bly).

Damnation Island re-creates what daily life was like on the island, what politics shaped it, and what constituted charity and therapy in the nineteenth century. Throughout the book, we return to the extraordinary Blackwell's missionary Reverend French, champion of the forgotten, as he ministers to these inmates, battles the bureaucratic mazes of the Corrections Department and a corrupt City Hall, testifies at salacious trials, and in his diary wonders about man's inhumanity to man.

For history fans, and for anyone interested in the ways we care for the least fortunate among us, Damnation Island is an eye-opening look at a closed and secretive world. In a tale that is exceedingly relevant today, Horn shows us how far we've come—and how much work still remains.