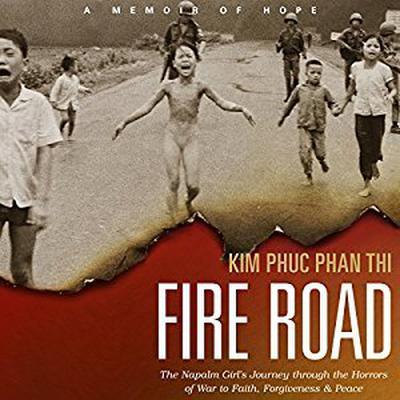 Fire Road: The Napalm Girl’s Journey through the Horrors of War to Faith, Forgiveness, and Peace

Get out! Run! We must leave this place! They are going to destroy this whole place! Go, children, run first! Go now! These were the final shouts nine year-old Kim Phuc heard before her world dissolved into flames—before napalm bombs fell from the sky, burning away her clothing and searing deep into her skin. It's a moment forever captured, an iconic image that has come to define the horror and violence of the Vietnam War. Kim was left for dead in a morgue; no one expected her to survive the attack. Napalm meant fire, and fire meant death.

Against all odds, Kim lived—but her journey toward healing was only beginning. When the napalm bombs dropped, everything Kim knew and relied on exploded along with them: her home, her country's freedom, her childhood innocence and happiness. The coming years would be marked by excruciating treatments for her burns and unrelenting physical pain throughout her body, which were constant reminders of that terrible day. Kim survived the pain of her body ablaze, but how could she possibly survive the pain of her devastated soul?

Fire Road is the true story of how she found the answer in a God who suffered Himself; a Savior who truly understood and cared about the depths of her pain.

“With great skill, Emily Woo Zeller narrates the author’s life after her village was bombed. You can’t help but be drawn into this story as Zeller takes great pains to encapsulate the agony and loneliness the young Kim Phuc felt in the aftermath. But when sorrow turns to joy found in Christ, listeners hear the hope and excitement in her voice…Winner of the AudioFile Earphones Award.” —AudioFile
“‘Napalm girl’ Kim Phuc gained inadvertent fame as a 1970s antiwar icon when a photographer took a picture of her as she ran naked from a napalm attack in Vietnam. Kim Phuc now provides the story behind the photo, chronicling her idyllic Vietnamese childhood in a prosperous home, the effects of the painful burns across her body, and her personal trials as she traveled from Vietnam to Cuba and then to Canada… Kim Phuc exhibits forceful resolve, steely self-determination, and seemingly limitless empathy. This spare and lucid memoir will touch readers of all faiths and nationalities.” —Publishers Weekly

Kim Phuc Phan Thi was a nine-year-old girl in 1972 when she made world news as she was photographed escaping her Vietnamese village, which had been bombed with napalm. She was so badly burned that she was not expected to survive, but after fourteen months in a Saigon hospital and sixteen skin-graft surgeries, she returned to her village to begin rebuilding her life…She is now the founder of the Kim Foundation International in Ontario, Canada, and a UNESCO Goodwill ambassador. She and her husband live in the Toronto area, along with their two children.