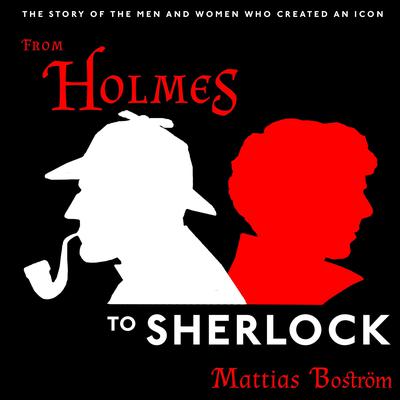 From Holmes to Sherlock: The Story of the Men and Women Who Created an Icon

Winner of the Swedish Crime Writers Academy Award for Nonfiction

Winner of the 2018 Agatha Award for Best Nonfiction

Finalist for the 2018 Anthony Award for Best Critical/Nonfiction Book

Finalist for the 2018 Edgar Award for Best Critical/Biographical Work

In From Holmes to Sherlock, Mattias Boström recreates the full story behind the legendary detective and his many incarnations—a real-life narrative of success, tragedy, and family secrets that has never previously been told in its entirety. The beginning is classic: a young Arthur Conan Doyle sitting in a Scottish lecture hall taking notes on his medical professor Dr. Joseph Bell's powers of observation. More than a decade later, Conan Doyle's short stories became a runaway success in the popular monthly Strand Magazine. A parallel Holmes soon evolved with a whole industry of plays, parody, and pastiche, and Boström skillfully follows the men and women who have perpetuated and recast the Sherlockian myth—including the actors who became famous for their personifications of Holmes; Conan Doyle's sons, who desperately wanted to make big business of the detective; the Georgian princess who ended up entangled in the Conan Doyle legacy; and finally the pair of modern-day fans who brainstormed the idea behind the TV sensation Sherlock. Written in novelistic prose, Boström's account is a singular celebration of the most famous detective in the world—a must-read for newcomers and experts alike.

“Riveting…Boström has expertly unearthed entertaining instances of the sleuth’s diverse appearances in all media, throughout the world…Wonderfully entertaining.” —Wall Street Journal
“The best account of Baker Street mania ever written. Really…He shows us how Sherlock Holmes enchanted the world.” — Washington Post
“Terrific…Boström has written a necessary addition to any Baker Street library.” — Christian Science Monitor
“Brings together everything you thought you knew about Sherlock Holmes, and then some…Both a work of deep scholarship and a disarmingly racy read.” —Sydney Morning Herald (Australia)
“Provides a unique approach to the history of the Sherlock Holmes phenomenon that had me turning all 500 pages of this tome with interest.” — Ellery Queen Mystery Magazine (5 stars)
“When next asked why you so love Sherlock Holmes, hand your interrogator a copy of this work.” —Baker Street Journal

Mattias Bostrom is a Swedish author, publisher, and Sherlock Holmes expert. He is a member of the Baker Street Irregulars and has been an active Sherlockian for thirty years, publishing articles and editing books and booklets on the subject. The Swedish edition of From Holmes to Sherlock won the nonfiction award from the Swedish Crime Writers’ Academy and was shortlisted for the prize for Best Swedish Nonfiction Book of the Year.