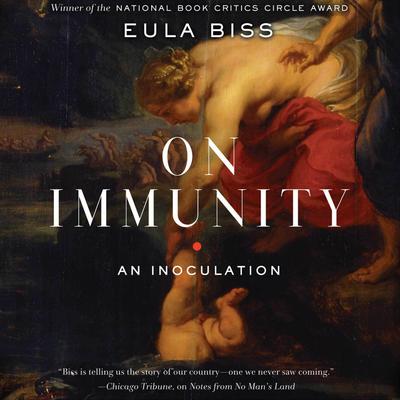 On Immunity: An Inoculation

A BookPage Top Pick of Audiobooks for June 2015

Upon becoming a new mother, Eula Biss addresses a chronic condition of fear—fear of the government, the medical establishment, and what is in your child's air, food, mattress, medicine, and vaccines. She finds that you cannot immunize your child, or yourself, from the world. In this bold, fascinating book, Biss investigates the metaphors and myths surrounding our conception of immunity and its implications for the individual and the social body. As she hears more and more fears about vaccines, Biss researches what they mean for her own child, her immediate community, America, and the world, both historically and in the present moment. She extends a conversation with other mothers to meditations on Voltaire's Candide, Bram Stoker's Dracula, Rachel Carson's Silent Spring, Susan Sontag's AIDS and Its Metaphors, and beyond. On Immunity is a moving account of how we are all interconnected—our bodies and our fates.

“Fascinating…By exploring the anxieties about what’s lurking inside our flu shots, the air, and ourselves, she drives home the message that we are all responsible for one another. On Immunity will make you consider that idea on a fairly profound level. Grade: A.” —Entertainment Weekly
“Eula Biss sanely takes on the anti-vaccine mob.” —Vanity Fair
“Biss’s gracious rhetoric and her insistence that she feels ‘uncomfortable with both sides’ of the rancorous fight may frustrate readers looking for a pro-vaccine polemic. Yet her approach might actually be more likely to sway fearful parents, offering them an alternative set of images and associations to use in thinking about immunization…Compelling…This is writing designed to conquer anxiety.” —New Yorker
“On Immunity casts a spell…There’s drama in watching this smart writer feel her way through this material. She’s a poet, an essayist, and a class spy. She digs honestly into her own psyche and into those of ‘people like me,’ and she reveals herself as believer and apostate, moth and flame.” —New York Times
"[An] elegant, intelligent, and very beautiful book, which occupies a space between research and reflection, investigating our attitudes toward immunity and inoculation through a personal and cultural lens.” —Los Angeles Times
“[A] far-reaching and unusual investigation into immunity…Artfully mixing motherhood, myth, maladies, and metaphors into her presentation, Biss transcends medical science and trepidation.” —Booklist (starred review)
“Biss ably tracks the progress of immunization…Biss also administers a thoughtful, withering critique to more recent fears of vaccines—the toxins they carry, from mercury to formaldehyde, and accusations of their role in causing autism. The author keeps the debate lively and surprising…but arrives at a clear point of view: Vaccinate. Brightly informative, giving readers a sturdy platform from which to conduct their own research and take personal responsibility.” —Kirkus Reviews (starred review)
“Biss, while making an unimpeachable case for childhood vaccination, delves into the metaphors that accompany notions of purity and invasion and recounts the medical history of vaccine development. It’s a touching personal story that seeks to understand why the antivax crowd exists and why it’s such a well-meaning, if misguided, movement.” —Publishers Weekly
“Seamless prose, the kind of narrative nonfiction that makes for compelling, intriguing listening…As you listen to Tamara Marston’s gentle voice, you’ll get a strong shot of informed, elegant reasoning.” —BookPage (audio review)
“Without detracting from the book’s scholarly foundation, narrator Tamara Marston’s lively performance highlights the author’s voice in this investigation of questions surrounding inoculation…Marston’s understated level of emotion keeps listeners invested and adds to the accessibility of the subject matter.” —AudioFile
“A thoughtful and probing analysis of the cultural myths surrounding vaccination. Biss mines within herself and within her community to understand how and why such myths gain traction in society.” —Danielle Ofri, MD, PhD, author of What Doctors Feel: How Emotions Affect the Practice of Medicine

Eula Biss is the author of Notes from No Man’s Land, winner of the National Book Critics Circle Award for criticism, and The Balloonists. Her essays have appeared in the Believer and Harper’s. She teaches at Northwestern University and lives in Chicago, Illinois.