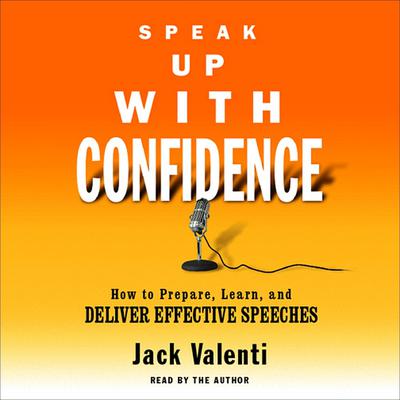 Speak Up With Confidence: How to Prepare, Learn, and Deliver Effective Speeches

Winner of the 2003 Independent Publisher Award for Self-Help

Public speaking is one of the most intimidating and important aspects of many jobs. As a one-time speech writer for President Johnson, and in his current position as president of the M.P.A.A., Jack Valenti has written and delivered speeches in all kinds of settings. Originally published in 1982, Speak Up with Confidence is an indispensable resource for anyone who wants to write and deliver a speech that people will listen to and remember.

Jack Valenti (1921–2007) was a longtime president of the Motion Picture Association of America. During his thirty-eight-year tenure in the MPAA, he created the MPAA film rating system, and was regarded as one of the most influential pro-copyright lobbyists in the world.