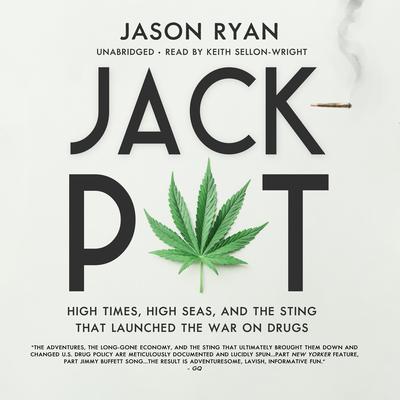 Jackpot: High Times, High Seas, and the Sting That Launched the War on Drugs

In the late 1970s and early ’80s, a cadre of freewheeling, Southern pot smugglers lived at the crossroads of Miami Vice and a Jimmy Buffett song. These irrepressible adventurers unloaded nearly a billion dollars worth of marijuana and hashish through the eastern seaboard’s marshes. Then came their undoing: Operation Jackpot, one of the largest drug investigations ever and an opening volley in Ronald Reagan’s War on Drugs.

In Jackpot, author Jason Ryan takes us back to the heady days before drug smuggling was synonymous with deadly gunplay. During this golden age of marijuana trafficking, the country’s most prominent kingpins were a group of wayward and fun-loving Southern gentlemen who forsook college educations to sail drug-laden luxury sailboats across the Mediterranean, the Atlantic, and the Caribbean. Les Riley, Barry Foy, and their comrades eschewed violence as much as they loved pleasure, and it was greed, lust, and disaster at sea that ultimately caught up with them, along with the law.

In a cat-and-mouse game played out in exotic locations across the globe, the smugglers sailed through hurricanes, broke out of jail, and survived encounters with armed militants in Colombia, Grenada, and Lebanon. Based on years of research and interviews with imprisoned and recently released smugglers and the law enforcement agents who tracked them down, Jackpot is sure to become a classic story from America’s controversial Drug Wars.

"Jackpot is a rip-roaring good read.” —Charleston City Paper
“The adventures, the long-gone economy, and the sting that ultimately brought them down and changed U.S. drug policy are meticulously documented and lucidly spun…Part New Yorker feature, part Jimmy Buffett song…the result is adventuresome, lavish, informative fun.” —GQ
“Ryan has hit the jackpot with this tale of drug smuggling on the high seas…[which] reads like an international thriller…Chock-a-block with hilarious and hair-raising anecdotes of fast times.” —New York Journal of Books
“[A] thoroughly researched account of Operation Jackpot…Ryan recreates the era with a vivid, sun-drenched intensity.” —Publishers Weekly
“A well-told tale of true crime that provides a few good arguments for why it should not be a crime at all.” —Kirkus Reviews

Jason Ryan is the author of Hell-Bent: One Man’s Crusade to Crush the Hawaiian Mob, as well as Jackpot: High Times, High Seas, and the Sting That Launched the War on Drugs and Race to Hawaii: The 1927 Dole Air Derby and the Thrilling First Flights That Opened the Pacific.