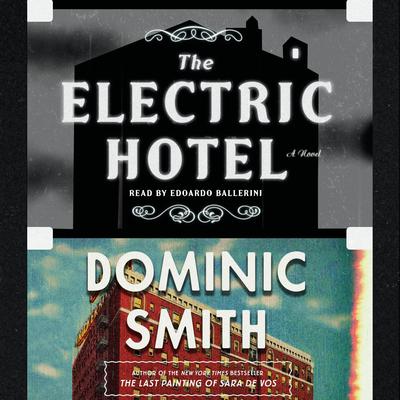 The Electric Hotel: A Novel

From New York Times bestselling author Dominic Smith comes a radiant audiobook tracing the intertwined fates of a silent-film director and his muse.

The Electric Hotel winds through the nascent days of cinema in Paris and Fort Lee, New Jersey—America’s first movie town—and on the battlefields of Belgium during World War I as it tells the story of the rise and fall of a prodigious film studio and one man’s doomed obsession with all that passes in front of the viewfinder.

For nearly half a century, Claude Ballard has been living at the Hollywood Knickerbocker Hotel. A French pioneer of silent films, who started out as a concession agent for the Lumière brothers, the inventors of cinema, Claude now spends his days foraging mushrooms in the hills of Los Angeles and taking photographs of runaways and the striplings along Sunset Boulevard.

But when a film-history student comes to interview Claude about The Electric Hotel—the lost masterpiece that bankrupted him and ended the career of his muse, Sabine Montrose—the past comes surging back. In his run-down hotel suite, the ravages of the past are waiting to be excavated: celluloid fragments, reels in desperate need of restoration, and Claude’s memories of the woman who inspired and beguiled him.

“A glorious ode to the luminous art that ushered in Hollywood’s film era.” —The BBC (London)
“A vital and highly entertaining work about the act of creation, and about what it means to pick up and move on after you’ve lost everything.” —New York Times
“An irresistible and dizzying international tale of early cinema.” —Washington Post
“You get lost in these pages like you do in a great movie, not wanting the lights to come up.” —Seattle Times
“A compelling plot, robust characters, and finely crafted prose richly evoke a bygone age and art.” —Kirkus Reviews (starred review)
“Dominic Smith’s latest fictional dive into the history of an art form makes for a rich audiobook under narrator Edoardo Ballerini’s able management…Ballerini makes the international cast vivid…Hold on for the literal cliff-hanger in reel four. It’s on fire.” —AudioFile
“As fresh and deliciously strange as the first days of film-making it so dazzlingly brings to life, The Electric Hotel is utterly absorbing, astonishingly inventive, and richly imagined. Dominic Smith is a wizard.” —Andrea Barrett, National Book Award winner

Dominic Smith is the author of The Beautiful Miscellaneous. He is a former recipient of the Dobie Paisano Fellowship from the Texas Institute of Letters. His fiction has been nominated for a Pushcart Prize and has appeared in the Atlantic Monthly. He grew up in Australia and now lives in Austin, Texas, where he received an MFA from the James A. Michener Center for Writers.