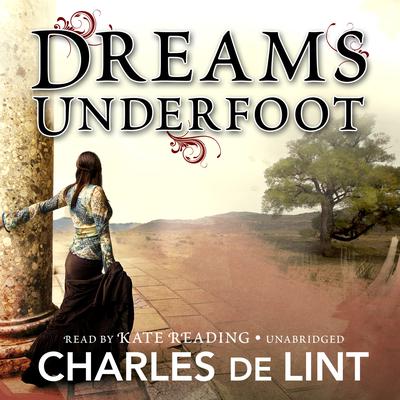 Welcome to Newford—to the music clubs, the waterfront, and the alleyways where ancient myths and magic spill into the modern world. Gemmins live in abandoned cars and skells traverse the tunnels below, while mermaids swim in the grey harbor waters and fill the cold night with their song. Come meet Jilly, painting wonders in the rough city streets; and Geordie, playing fiddle while he dreams of a ghost; and the Angel of Grasso Street, gathering the fey and the wild and the poor and the lost.

Like Mark Helprin's A Winter's Tale and John Crowley's Little, Big,Dreams Underfoot, a collection of nineteen stories, is a must-read book, not only for fans of urban fantasy but for all who seek magic in everyday life.

“[Kate Reading’s] wide vocal range serves the listener well, as she is able to voice the many different characters distinctively and lend each the emotional weight he or she commands in turn.” —SFSite.com
“In de Lint’s capable hands, modern fantasy becomes something other than escapism. It becomes folk song, the stuff of urban myth.” —Phoenix Gazette
“Charles de Lint shows that, far from being escapism, contemporary fantasy can be the deep mythic literature of our time.” —Magazine of Fantasy & Science Fiction
“This collection of conceptually innovative, thematically simple stories proves again that de Lint is a leading talent in the urban fantasy subgenre.” —Publishers Weekly
“Kate Reading tells their stories as if she knows her characters well and is familiar with their tales. She uses pace, timing, and tone to reflect the personalities of the main characters without neglecting the minor players. With a light touch she takes the unexpected and bizarre in stride and provides continuity and a unifying voice to the collection.” —AudioFile
“Superior work that upholds de Lint’s high reputation [and] definitely recommended for fantasy collections.” —Booklist