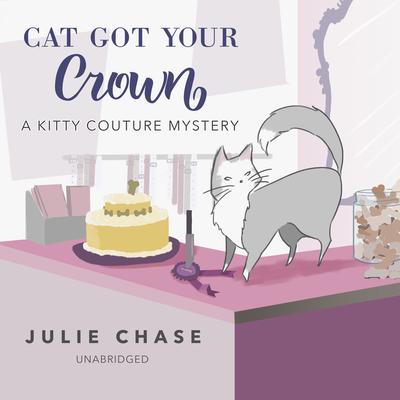 Cat Got Your Crown: A Kitty Couture Mystery

With a pet pageant around the corner and a killer unleashed, Lacy will have to collar the culprit before the claws come out. Julie Chase is back with her fourth delightful Kitty Couture mystery, perfect for fans of Rita Mae Brown and Blaize Clement.

Lacy Marie Crocker can hardly believe it’s been a year since her return home to New Orleans. There hasn’t been a dull moment since opening her pet boutique last summer, and thanks to the popularity of Lacy’s organic pet treats, and the arrival of the National Pet Pageant, Lacy desperately needs some help before she is overrun by the demand for pupcakes and crinolines.

The entire Garden District seems to be counting the minutes until opening night of the pet pageant and everything is going spectacularly until Viktor Petrov, the pageant emcee, takes a spill from the balcony during dress rehearsal. All signs points to murder and homicide detective Jack Oliver sets his eyes on Eva Little, one of Lacy’s committee sisters and the only other person on the balcony at the time of the fall, as the killer. But when it comes out that Viktor was notoriously rude, the doors blow wide open with potential suspects who could have wanted him dead.

Lacy is determined to find the killer and exonerate Eva, but when Lacy receives a mysterious warning—a plush kitty from Lacy’s shop with its mouth crudely stitched over—it’s clear that she’s been found first. Full of killer recipes for your pet, Cat Got Your Crown is Julie Chase’s uproarious fourth Kitty Couture mystery.

“Well-rounded characters, light humor, and a plethora of suspects make this a fun cozy.” —Publishers Weekly

Julie Chase is a mystery-loving pet enthusiast who hopes to make readers smile. A member of the International Thriller Writers and Sisters in Crime, she lives in rural Ohio with her husband and three small children.