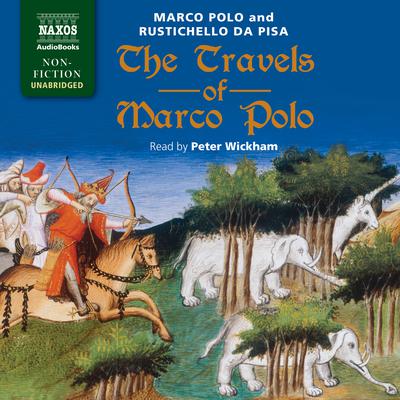 The Travels of Marco Polo

The Travels of Marco Polo is the classic account of Marco Polo’s journey to China from Venice, and his discoveries as an emissary to the great Kublai Khan. Polo explores everywhere from Baghdad, Armenia and Russia to the Caspian Sea, the Gobi Desert and the small fishing villages of China, describing the geography, architecture and customs of these exotic places. He tells stories of assassins, cannibals, fantastical animals, feasts and battles, and gives a fascinating account of the multicultural empire of Kublai Khan. The Travels is said to have inspired the voyages of Magellan and Columbus, the latter having kept an annotated copy among his belongings. It remains one of the most entertaining travelogues in existence.

“Narrator Peter Wickham’s voice is aged and a bit rough but energetic and cultured in this recounting of Marco Polo’s wanderings through thirteenth-century Asia. Wickham speaks more as one declaiming an official account than telling a story, which suits a book written in the third person, but he maintains a likable persona, good-humored and wise, befitting a man recalling the exploits of his youth. He raises the energy level when the text calls for increased emotion, as in quotations…Wickham makes a fine traveling companion.” —AudioFile