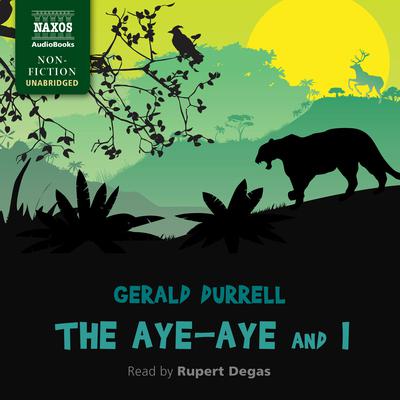 The Aye-Aye and I

Gerald Durrell’s last book, The Aye-Aye and I records his final animal-collecting expedition, a trip to Madagascar in 1990, and his efforts to save the elusive and mythical lemuroid known as the Aye-Aye. Prompted by the country’s radical deforestation, and slash-and-burn agriculture, Durrell, his wife, and their team of zoologists embark on a mission to capture and conserve the species – distinguished by its ‘giant, chisel-like teeth’, ‘round, hypnotic eyes’ and large ‘spoon-like ears’. During the course of their journey, they encounter golden river snakes, flat-tailed tortoises, the gentle lemurs of Lac Alaotra, and the Malagasy chameleons. Durrell’s exuberant descriptions of the island, its people and ecology are among his best.

“Oh, the utter delight of adventuring in Madagascar with the late English naturalist Gerald Durrell and his poly-voiced narrator, Rupert Degas, who beautifully channels Durrell’s slightly raspy voice, his exuberant personality, and his enthusiasm for every variety of fauna, including human. The book describes a 1990s trip to Madagascar’s remotest regions to find and collect a breeding population of a mysterious and endangered lemur known as an aye-aye. As Durrell’s team and a BBC film crew endure drenching rain, oven-baked heat, and giant mosquitoes with edifying humor, Degas evokes a wealth of personalities and accents, adding technicolor to the lively writing. Where else, for example, could one meet a hammerhead shark with a mouth reminiscent of ‘Somerset Maugham’s drooping smile’? Winner of the AudioFile Earphones Award.” —AudioFile
“Adventure, humor, and a serious scientific mission add up to first-rate entertainment.” —Publishers Weekly
“Another delightful excursion into nature by the always amusing Durrell.” —Kirkus Reviews
“An often humorous romp to a faraway place.” —Library Journal
“Expertly narrated by Rupert Degas…Durrell’s enthusiasm for all manner of fauna is ably conveyed by Degas, as is his gift for wry, fanciful description…Durrell writes with Dickensian relish, ably assisted by Degas’s tremendous facility with character voices, and with accents that range from West African pidgin to Argentinian Spanish, German, French, Malagasy, and parrot…Less showy than these verbal pyrotechnics but no less masterful is Degas’ interpretation of Durrell himself, droll and slightly posh, with a wry appreciation for the foibles and eccentricities of man and beast alike, anchored by an earnest, clear-eyed sense of kinship with every living thing. Alternately breezy, curmudgeonly, fascinated, and bemused, Degas perfectly captures Durrell’s spirit, and the abundant charm of his literary escapades, which are certain to divert and educate listeners of almost any age.” —Booklist (audio review)

Gerald Durrell (1925–1995) was a British naturalist, zookeeper, conservationist, author, and television presenter. He wrote more than twenty-five nature books, as well as the memoirs My Family and Other Animals; Birds, Beasts and Relatives; A Zoo in My Luggage; The Whispering Lands; and The Garden of the Gods. A student of zoology, he founded the Durrell Wildlife Conservation Trust on the Channel Island of Jersey.