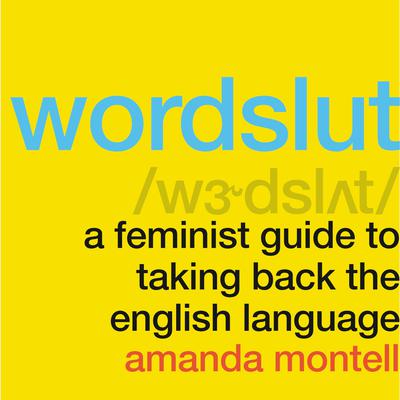 Wordslut: A Feminist Guide to Taking Back the English Language

A brash, enlightening, and wildly entertaining feminist look at gendered language and the way it shapes us, written with humor and playfulness that challenges words and phrases and how we use them.

“I get so jazzed about the future of feminism knowing that Amanda Montell’s brilliance is rising up and about to explode worldwide.”—Jill Soloway

The word bitch conjures many images for many people, but it is most often meant to describe an unpleasant woman. Even before its usage to mean a female canine, bitch didn’t refer to gender at all—it originated as a gender-neutral word meaning genitalia. A perfectly innocuous word devolving into a female insult is the case for tons more terms, including hussy—which simply meant housewife—or slut, which meant an untidy person and was also used to describe men. These words are just a few among history’s many English slurs hurled at women.

Amanda Montell, reporter and feminist linguist, deconstructs language—from insults and cursing, gossip, and catcalling to grammar and pronunciation patterns—to reveal the ways it has been used for centuries to keep women and other marginalized genders from power. Ever wonder why so many people are annoyed when women talk with vocal fry or use the word like as a filler? Or why certain gender-neutral terms stick and others don’t? Or where stereotypes of how women and men speak come from in the first place?

Montell effortlessly moves between history, science, and popular culture to explore these questions and more—and how we can use the answers to effect real social change. Montell’s irresistible humor shines through, making linguistics not only approachable but both downright hilarious and profound, demonstrated in chapters such as:

Montell effortlessly moves between history and popular culture to explore these questions and more. Wordslut gets to the heart of our language, marvels at its elasticity, and sheds much-needed light into the biases that shadow women in our culture and our consciousness.

“Grounded in decades of innovative feminist scholarship, full of witty personal stories, and written with the pragmatic aim of disrupting and changing the status quo, this is a humorous and important book for anyone interested in gender equality, wordplay, or fostering precise communication. Just the kind of sharp, relevant scholarship needed to continue to inspire the next generation of feminist thought.” —Kirkus Reviews
“At its heart, this work reflects a tenet of sociolinguistic study: language is not divorced from culture; it both reflects and creates beliefs about identity and power. Modern stylings situated within foundational research will hopefully bring a new audience to the field of language and gender studies.” —Library Journal