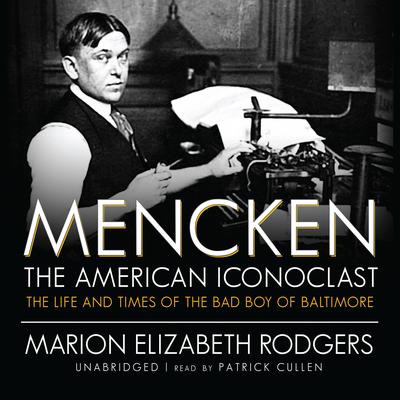 Mencken: The American Iconoclast: The Life and Times of the Bad Boy of Baltimore

A towering figure on the American cultural landscape, H. L. Mencken stands out as one of our most influential stylists and fearless iconoclasts—he was the twentieth century’s greatest newspaper journalist, a famous wit, and a constant figure of controversy. He fought for civil liberties and free speech when few others would, yet he held paradoxical views of minorities and was conflicted as a German-American during the two world wars. Marion Rodgers frames the public and the private man in a vivid recreation of his era, from the roaring twenties to the depressed thirties and on through World War II. Covered in the book are the many love affairs that made him known as “The German Valentino,” his happy marriage at age fifty, and his pivotal role in introducing James Joyce, F. Scott Fitzgerald, and Langston Hughes to the American literary scene.

“[Mencken] single-handedly ushered American letters into the 20th century…and he did all of it in a swaggering, sarcastic and yet elegant prose style that remains—or ought to remain, anyway—the model for every columnist, critic and blog-militant in this famously polarized age…Let us hope that this comprehensive study of Mencken’s life introduces a new generation of readers to this enemy of falsehood and destroyer of pretense, this man whose response to the absurdity of the culture wars was laughter.” —Washington Post
“Every new generation should rediscover H. L. Mencken, and every journalist should read this fine biography. Marion Elizabeth Rodgers has produced a balanced, measured portrait, proving herself as adept at probing the labyrinth of Mencken’s private life as she is at placing his iconoclasm in the context of his times.” —Sunday Times (London)
“In this splendid biography…Rodgers juggles the dense narrative of Mencken’s life and times with considerable dexterity, while also providing a glimpse into his very private world…His was one of the key American literary lives of the 20th century and Rodgers has, quite simply, done him proud.” —London Independent
“H.L. Mencken…has always been a hard nut to crack. Now Marion Elizabeth Rodgers has, for once and for all, just about done it...In clear and forceful prose he would have approved of, Rodgers gives Mencken his rightful place in American literature and life. Her book is...captivating.” —Los Angeles Times
“In these parlous times, when ‘media personalities’ parrot partisan talking points, a visit with Mencken is a seidel of cold pilsner on a hot day. Born in 1880, he died in 1956. Why do people still talk about him 50 years later? The most exhilarating way to find out is to read Mencken: The American Iconoclast, by Marion Elizabeth Rodgers. This biography, the best ever on the sage of Baltimore, is exhaustive but never exhausting, and offers readers more than moderate intelligence and an awfully good time.” —Boston Globe
“A biography that stands out in a crowded field because of her exhaustive research and her deft touch as a writer…she is by far the most capable storyteller. The extent of her research is phenomenal…but she is never overwhelmed by her material. Rather, she is able to weave all these intricate details into a narrative that enables readers to see how this extraordinary life unfolded in real time…Rodgers’ life of Mencken is memorable and engaging…she now stands with the best of the great journalist’s biographers.” —San Francisco Chronicle
“Rodgers tells all with considerable verve…She’s certainly covered Mencken’s extraordinarily complex life with exemplary thoroughness, sympathy and honesty, and more than a little wit.” —Baltimore Sun
“Provides new insights into the inner life and character of a man who has always been an enigma…But it is her sympathetic yet unflinching look at Mencken the lover and Mencken the (falsely) accused bigot and defender of Hitler that make her book special…Rodgers’ biography brings fresh understanding to America’s greatest journalist, who approached every subject with complete fearlessness and honesty and the conviction that the writer must always put on a good show. Did he ever.” —Memphis Flyer
“The most recognizably human Mencken to date…The best, as well as the liveliest, up-to-date biography…Mencken’s timeliest quality remains his bedrock principles, particularly his commitment to civil liberty in times of hysteria—and regardless of popular opinion.” —American Conservative
“Drawing on research in more than sixty archives (including previously unseen private collections in the US and in Germany), exclusive interviews with Mencken’s friends and his love letters, this is a meticulous portrait of one of the most original and complicated men in American letters.” —Publishers Weekly (starred review)
“With obvious affection for her subject, access to untapped sources, and interviews with Mencken’s friends and enemies, Rodgers offers an absorbing look at the ‘bad boy of Baltimore’…Rodgers conveys the high spirits and complexity of an American iconoclast and the turbulent times in which he lived.” —Booklist (starred review)
“A superb study of the life of the cigar-chomping controversialist, civil libertarian and muckraker who remains the patron saint of journalists, at least of a certain age…The best biography of Mencken to date.” —Kirkus (starred review)

Marion Elizabeth Rodgers has edited Mencken and Sara: A Life in Letters and The Impossible H. L. Mencken, a popular collection of his best journalism. She lives in Washington, DC.