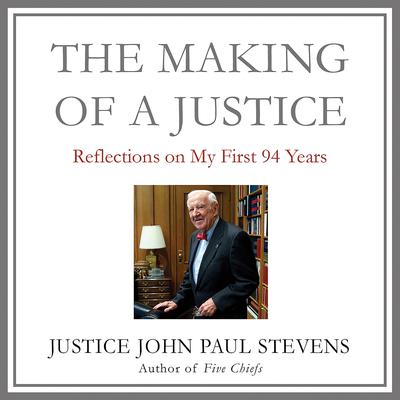 The Making of a Justice: Reflections on My First 94 Years

When Justice John Paul Stevens retired from the Supreme Court in 2010, he left a legacy of service unequaled in the history of the Court. During his 34-year tenure, Justice Stevens was a prolific writer, authoring nearly 400 opinions and more than 500 dissents. In THE MAKING OF A JUSTICE, John Paul Stevens recounts the first ninety-four years of his extraordinary life, offering an intimate and illuminating account of his service on the nation's highest court.

Appointed by President Gerald Ford and eventually retiring during President Obama's first term, Justice Stevens has been witness to, and an integral part of, landmark changes in American society.


With stories of growing up in Chicago, his work as a Naval traffic analyst at Pearl Harbor during World War II, and his early days in private practice, as well as a behind-the-scenes look at some of the most important Supreme Court decisions over the last four decades, THE MAKING OF A JUSTICE offers a warm and fascinating account of Justice Stevens' unique and transformative American life.This comprehensive memoir is a must read for those trying to better understand our country and the Constitution.

“Stevens delivers…on a handful of timely and hugely important themes, starting with the shape of American democracy…Stevens gives us a taste of his explanatory talents when he highlights the majority opinion he calls his ‘most unpopular.’ (It involved eminent domain.)…Whatever you make of the merits of his position, his defense crackles with spirit.” —New York Times
“Studded with cameos by boldface names…The new book lays out his philosophy through example, through cases and events that influenced his thinking.” —Wall Street Journal
“Has indisputable historical value.” — Chicago Tribune
“Stevens’ illumination of the court’s internal processes, accounts of cases, and often caustic opinions of its results form an important contribution to legal literature.” —Booklist

John Paul Stevens served as a judge of the United States Court of Appeals for the Seventh Circuit from 1970–1975. President Ford nominated him as an associate justice of the Supreme Court, and he took his seat December 19, 1975. Justice Stevens retired from the Supreme Court on June 29, 2010.