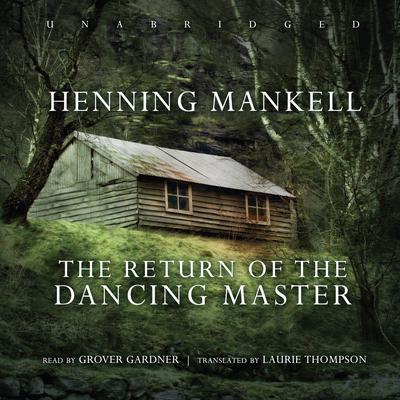 The Return of the Dancing Master

Winner of the Gumshoe Award for Best European Crime Novel

Finalist for the Los Angeles Times Book Prize for Mystery/Thriller

When retired policeman Herbert Molin is found brutally slaughtered on his remote farm in the northern forests of Sweden, police find strange tracks in the snow, as if someone had been practicing the tango. Stefan Lindman, a young police officer recently diagnosed with mouth cancer, decides to investigate the murder of his former colleague but is soon enmeshed in a mystifying case with no witnesses and no apparent motives. Terrified of the disease that could take his life, Lindman becomes more and more reckless as he unearths the chilling links between Molin’s death and an underground neo-Nazi network that runs further and deeper than he could ever have imagined.

“The characters drawn by Henning Mankell are so real you can hear them breathe…Gardner’s performance transcends the dreary, sunless Swedish landscape, bringing just the right tone to Mankell’s gritty police procedural. Winner of an AudioFile Earphones Award.” —AudioFile
“Violence strikes with quick and shocking ferocity…The story has a density that demands—and rewards—intellectual movement.” —New York Times Book Review
“Delightfully morbid.” —The Guardian (London)
“Mankell weaves a mournful spell through all his mysteries by adopting a calm, dispassionate tone that artfully underlines an abiding humanism for psychic as well as physical suffering…Sends a shiver down the spine.” —Boston Globe
“Irrestible…[Mankell] is a master at constructing gripping, intricately plotted police procedurals with a strong dose of social commentary…The appeal…[is] the sheer brutal imaginativeness of the crimes.” —Business Week
“As always, Mankell tells somber, deeply pessimistic stories about widespread hatred lurking below the multicultural surface, but at the same time, he never fails to find a rich vein of humanity deep within the perpetually furrowed brows of his troubled cops.” —Booklist