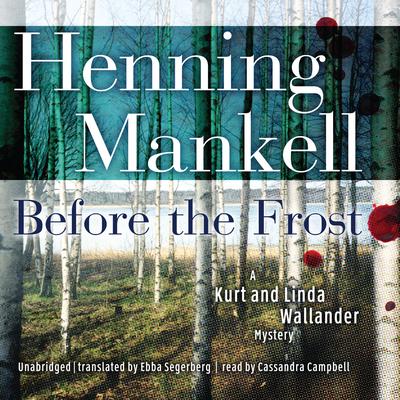 Before the Frost: A Kurt and Linda Wallander Novel

In this latest atmospheric thriller, Kurt Wallander and his daughter, Linda, join forces to search for a religious fanatic on a murder spree.

Just graduated from the police academy, Linda Wallander returns to Skåne to join the police force, and she already shows all the hallmarks of her father—the maverick approach, the flaring temper. Before she even starts work she becomes embroiled in the case of her childhood friend, Anna, who has inexplicably disappeared. As the case that her father is working on dovetails with her own, something far more dangerous than either could have imagined begins to emerge. They soon find themselves forced to confront a group of extremists bent on punishing the world’s sinners.

“An arresting story by an arresting writer…[Mankell] understands and probes the underside of everyday living in an elegant and artful way…He is able to look loneliness square in the eye. The result is writing that walks a line between ephemeral and everlasting.” —Washington Post
“Few of this genre’s writers—few of any genre’s writers—have been able to balance the ordinary and the grotesque with such literary dash and page-turning brio…Mankell’s atmospherics…give you metaphysical goose bumps.” —Boston Herald
“Powerful…Thoroughly engaging…Amazingly human characters…It’s a testament to Mankell’s skill with plot that the story gets more and more urgent as he transforms a series of small mysteries into a much larger thriller…Mankell [is] a master storyteller.” —San Francisco Chronicle
“I salivate with anticipation at the prospect of more from the pen of Mankell, for he is one of the finest of his genre—a Scandinavian Ian Rankin with a passion for exploring the dark side of human nature…Mankell builds the tension with care and, as ever, his characters are cleverly rounded…A masterpiece of atmospheric creation.” —Glasgow Herald
“Cassandra Campbell’s performance is an excellent fit for Swedish mystery master Henning Mankell’s brooding, complex characters. Through subtle vocal shifts, Campbell captures the love and antagonism between father and daughter, the confusion of affections and jealousies between friends, the grim Swedish landscape, and the depressive personalities inhabiting Mankell’s world.” —AudioFile
“Cassandra Campbell…renders the non-stop action and the angst of father and daughter believable.” —SoundCommentary.com