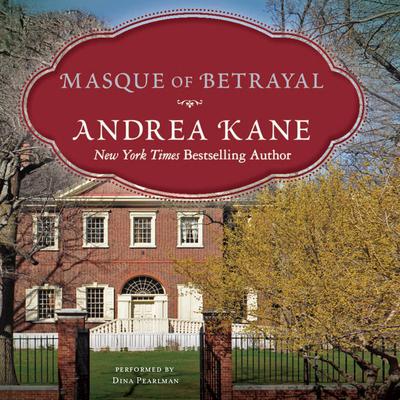 Scandal. Intrigue. Treachery. Betrayal. In a country divided, are Jacqueline and Dane ready to risk everything for love?

Defying convention in turn-of-the-19th-century Philadelphia, Jacqueline Holt speaks her mind and passionately crusades for a woman’s right to be independent and beholden to no man. And Dane Westbrooke threatens everything she stands for. The English aristocrat awakens desire with his first explosive kiss. Now Jacqui’s work could be undone by this sensual, seductive stranger who is her political enemy.

A nobleman who gave up his titles to swear allegiance to America, Dane possesses a powerful sixth sense—and his instinct tells him that Jacqui isn’t the traitor she seems. And so Dane falls prey to the ravishing beauty who tempts him beyond all measure. But Dane and Jacqui are living in treacherous times. With war on the horizon, a dangerous deception could cost them their lives…and the love that has liberated their hearts.

Andrea Kane’s psychological thriller, The Girl Who Disappeared Twice, became an instant New York Times bestseller. With a worldwide following, she is also the author of several romantic thrillers and more than a dozen historical romances. She lives in New Jersey with her family.