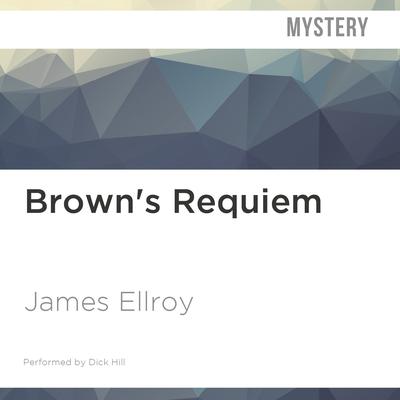 In James Ellroy’s first novel, a PI investigates a deadly conspiracy at one of Los Angeles’s most exclusive country clubs.

It would be a stretch to call Fritz Brown a detective. A PI in name only, he washed out of the police force at 25, and makes a cash living doing under-the-table repo work for a sleazy used-car dealer. It’s an ugly job, but Fritz is not one to say no to easy money.

That doesn’t mean he won’t take a case now and then. A caddy visits his office, asking Fritz to dig up dirt on the golf-nut who’s dating his sister. Convinced by the caddy’s suspiciously fat wad of bills, Fritz agrees to investigate, hoping for a chance to meet the girl. Instead he finds himself embroiled in a tangled world of country club intrigue, where wealth can buy innocence and murder is not half as rare as a hole-in-one.

James Ellroy was born in Los Angeles in 1948. His LA Quartet novels—The Black Dahlia, The Big Nowhere, L.A. Confidential, and White Jazz—were international bestsellers. American Tabloid was Time’s Novel of the Year for 1995, and his memoir My Dark Places was a Time Best Book of the Year and a New York Times Notable Book for 1996. He lives on the California coast.