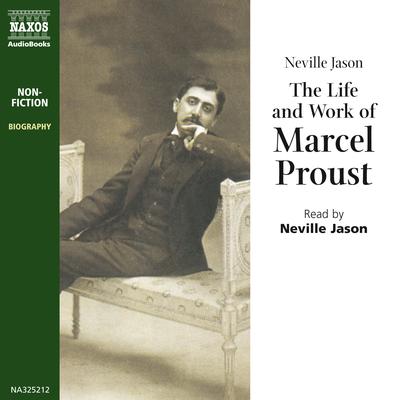 The Life & Work of Marcel Proust

Born in 1871, Marcel Proust was intent on becoming a writer from an early age. For much of his youth, Proust led the life of a man-about-town, frequenting fashionable Paris drawing rooms and literary salons, which would form the background of a number of his early stories and sketches. Remembrance of Things Past, the major French literary statement of the twentieth century, looks back at the old social order while noting the rise of a different way of life. It is extraordinary not only for its length but also for the remarkable observations of the aspirations, the foibles, and the emotions of life. This new biography is written and read by Neville Jason who, through his recordings, has become the voice of Proust for a generation.

Neville Jason is an award–winning narrator, as well as a television and stage actor. He has earned seven AudioFile Earphones Awards and been a finalist for the prestigious Audie Award for best narration. He is a former member of the Old Vic Company, the English Stage Company, the Royal Shakespeare Company, and the Birmingham Repertory Company. While training at the prestigious Royal Academy of Dramatic Art in London, he was awarded the diction prize by Sir John Gielgud.