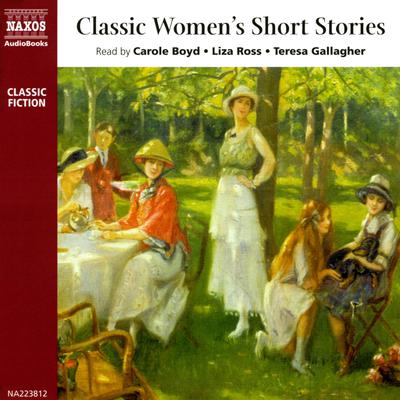 Classic Women’s Short Stories features five stories from influential female writers of the nineteenth century and the first decades of the twentieth century.

New Zealand-born Katherine Mansfield settled in England where she wrote a series of short stories that are widely recognized as among the finest of the twentieth century for their economy, clarity, sensitivity, and effect. “The Garden Party” is one of her most famous, while “Daughters of the Late Colonel” shows a wonderful sense of wit.

Kate Chopin, writing in the last years of the nineteenth century, broke new ground with her daring view of women as individuals with human needs. “Lilacs” and “Ma’ame Pelagie” are sympathetic portraits of women with differing dilemmas.

Virginia Woolf’s “A Mark on the Wall” shows, in short story form, the turmoil within stillness which became a mark of her later novels.

Katherine Mansfield (1888–1923) was born in Wellington, New Zealand, and settled in Europe to finish her education. She published her first short fiction in The New Age, then in Rhythm, whose editor, the British writer and critic John Middleton Murry, she soon married. Her writing contributed to the development of the stream of consciousness technique and to the modernist use of multiple viewpoints, and her style has had a powerful influence on subsequent writers in the same genre.

Virginia Woolf (1882–1941) was born in London, the daughter of Sir Leslie Stephen, first editor of the Dictionary of National Biography. From 1915 when she published her first novel, The Voyage Out, Woolf maintained an astonishing output of fiction, literary criticism, essays, and biography. In 1912 she married Leonard Woolf, and in 1917 they founded the Hogarth Press. Woolf suffered a series of mental breakdowns throughout her life, and on March 28, 1941, she committed suicide.

Kate Chopin (1851–1901) was born Katherine O’Flaherty in St. Louis in 1851. She was a popular social belle, admired for her wit and beauty. In 1871 she married Oscar Chopin and lived in Louisiana until his sudden death in 1882. Chopin began writing about the Creole and Cajun people in the South, gaining acclaim for her finely crafted short stories. Upon publication in 1899, her now-classic novel The Awakening was widely condemned for its controversial themes, and Chopin was devastated by its harsh critical reception. She died in 1904, denied in her lifetime the recognition she desperately wanted and richly deserved.