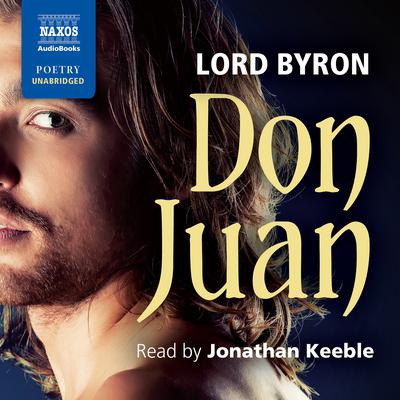 Lord Byron’s satirical take on the legend of Don Juan is a moving and witty poem that sees the young hero in a reversal of roles. Juan sheds his image as a womanizer and instead becomes the victim of circumstance as he is relentlessly pursued by every woman he meets.

Comprising seventeen cantos of rhyming iambic pentameter, the poem is a crisp and accessible meditation on the madness of the world.

“His capricious imagination rises…to heights that none can reach without wings.” —Victor Hugo, praise for the author
“Byron never managed to finish this epic, but Jonathan Keeble narrates right up to the end of what did get done…Keeble keeps up with the shifting moods and tones, which range from expressions of pure romantic love to snarky commentary on British politics (and poetic politics) of the 1820s. Keeble doesn’t overstress the rhyme or meter of Byron’s eight-line stanzas and goes over the top with emotions only when the text calls for it. This is, after all, mostly a comedic story, and although the jokes are almost two centuries old, Keeble keeps them fresh. Winner of the AudioFile Earphones Award.” —AudioFile

Lord Byron (1788–1824) was a Anglo-Scottish poet and a leading figure in the romanticism movement. His best known poems include “She Walks in Beauty,” “When We Two Parted,” and “So, We’ll Go No More a Roving,” among many others.