A Dredging in Swann: A Seb Creek Mystery

Two investigations start at the same time in Swann County, North Carolina, one by the FBI, the other by the sheriff. The feds want to know who stole three Stinger missiles during a helicopter crash. The sheriff wants to know who hanged a black ex-con in a well.

Seb Creek, a sheriff’s detective, gets involved in both investigations and fights through lies, secrets, and murder to find the killer. The trail involves a long-ago axe murder, the ravages of combat, an outdoor gas chamber, a mystery at the bottom of a well, and finally a last killing and an ancient testament.

A Dredging in Swann is a tale that deals powerfully with themes of war, race, justice, and, in the end, with healing.

Sometimes justice has to wait.

“Tim Garvin’s shrewd debut novel churns with unsettled scores. His wily and disarmingly sentimental detective Seb Creek dredges the past of tidewater Swann County to settle them. Creek’s subtle interrogations make this novel a signal launch.” —Kris Lackey, USA Today bestselling author of Nail’s Crossing and Greasy Bend
“Tim Garvin delivers the goods with his first Seb Creek novel, A Dredging in Swann. Sharp and insightful, this story of a former Marine MP turned small-city cop is a welcome addition to the canon of southern mysteries, and sets the stage for great things to come. Well done, Mr. Garvin!” —John Hart, two-time Edgar Award–winning author of The Hush
“The prose is gin-clear and occasionally striking.” —Booklist
“When a man who’s recently been released from prison is found hanged in a well, North Carolina detective Seb Creek must figure out if it was an accident or murder—and what about those missing Stinger missiles?…Investigating the two mysteries will take Seb all over the county, giving debut author Garvin a chance to display a true ear for dialogue and a talent for character portrayal…This polished, beautifully written novel makes one hope Garvin keeps exploring Swann County for a long time.” —Kirkus Reviews (starred review)
“Two knotty cases preoccupy fair-minded, conscientious sheriff’s detective Sebastian Creek, a former Marine MP recovering from PTSD, in this intriguing series launch from Garvin…The action builds to a suitably thrilling conclusion. Garvin skillfully draws together the many plot threads while also shining a compassionate light on PTSD sufferers bearing the scars of war.” —Publishers Weekly
“I’ve never read half a book in one sitting, but this time I did. Early on, the twists of A Dredging in Swann gripped tight and kept me shackled to the page. The book is full of rich deep characters and an amazingly complicated weave of plot. It’s written in strong, colorful prose and with a pace that sucks you in and holds you. I couldn’t leave until Detective Seb Creek had aired all secrets, old and new. Highly recommended—but word of warning … hold on to something while you’re reading.” —C. Hope Clark, author of the Edisto Island mysteries
“Tim Garvin’s muscular A Dredging in Swann offers two stories in one. The lawman Seb Creek must unravel a complicated murder. That’s the mystery. The suspense tale is whether Cody Cooper, a PTSD afflicted Marine, can extricate himself from his lunatic crime. As the narratives intertwine, they capture both the meanness and humanity of the rural South. The pages crackle with ironic observation and compassionate humor. This book is deadly serious. And serious fun.” —Fred Chappell, author of Farewell, I’m Bound to Leave You, Midquest: A Poem, and many other books 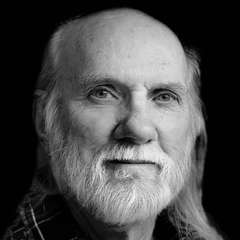 Tim Garvin grew up in Arizona, then the Alaskan wilderness. Now he lives beside a creek outside Durham, North Carolina, with his wife, Cynthia, and dog, Blue. He built a cabin beside the creek, and in the mornings goes down there to write. In the afternoons, he throws pots, gardens, reads, discusses life with Cynthia, and sometimes coaxes her and Blue to the coast to float around the Outer Banks in a little sailboat. He’s currently at work on a second Seb Creek book.