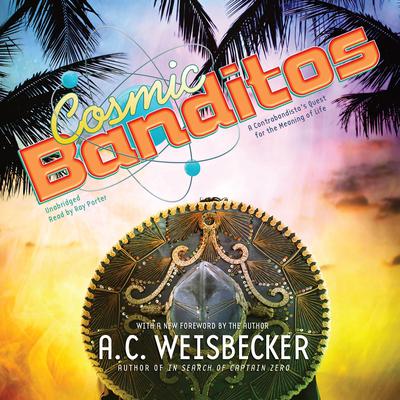 Cosmic Banditos: A Contrabandista's Quest for the Meaning of Life

Mr.Quark is a down-on-his-luck pot smuggler hiding out in the mountains of Columbia with his dog, High Pockets, and a small band of banditos led by the irascible José. Only months before, these three and their fearless associates were rolling millions in cash and high grade marijuana, eluding prosecution on “ridiculously false” drug and terrorism charges. But times have quickly grown lean, and to liven up their exile, José decides to mug a family of American tourists. Among the spoils are physics texts, which launch Mr. Quark on a sidesplitting, boisterous adventure north to California, where he confronts the owner of the books with his own theories on relativity, the nature of the universe and looking for the meaning of life in all the wrong places.

“A.C. Weisbecker outgonzos Hunter S. Thompson.” —UPI
“While quantum physics may not qualify as light reading, blended with a few hundred gallons of tequila, some explosions, and plenty of tall tales, it makes Cosmic Banditos a tasty cocktail to be enjoyed under a summer sun.” —UPI
“Outrageous…An absurd and highly entertaining comic romp.” —Booklist

Allan C. Weisbecker, novelist, screenwriter, memoirist, and surfer, is the author of Cosmic Banditos, In Search of Captain Zero, and Can’t You Get Along with Anyone?: A Writer’s Memoir and a Tale of a Lost Surfer’s Paradise. He has written articles for surfing magazines and has collaborated in writing screen and television scripts, including Crime Story and Miami Vice.