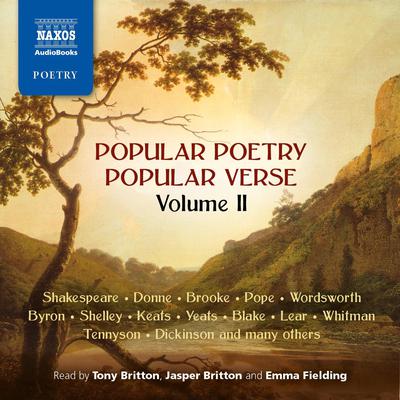 With nearly one hundred of the most popular and loved poems in the English language, this collection is one of the most comprehensive anthologies of its kind available.

Popular Poetry, Popular Verse, Volume II covers a remarkable range, from the striking vision of Blake and Shelley, the insights of Keats, to the lighter but equally memorable verse by Tennyson, Donne, and Edward Lear.

“Nearly 100 selections of poetry from well known poets spanning four centuries. The anthology is beautifully selected and documented and, as Naxos always does, punctuated with carefully chosen music. Father and son, Jasper and Tony Britton, use nicely complimenting, yet different styles for their narrations. They’re joined by Emma Fielding. There’s a great deal of variety here, from Robert Burns to Lewis Carroll, but each poet is given individual treatment…The pacing, appropriate pauses between selections, mood changes signaled by the music—all contribute to a sterling collection.” —AudioFile

John Donne (1572-1631) was an English poet, satirist, philosopher, and chaplain who is considered a founder of the Metaphysical Poets, a group of writers characterized by their ability to coax new perspective through paradoxical images, inventive syntax, and imagery from art, philosophy, and religion using an extended metaphor known as a conceit. Donne’s works are notable for their realistic and sensual style and include sonnets, love poetry, religious poems, Latin translations, epigrams, elegies, songs, satires, and sermons. He is firmly established as one of the greatest poets in the English language, strongly influencing writers of the seventeenth century. He died in 1631 and was buried at St. Paul’s Cathedral.

Rupert Brooke (1887-1915) was an English poet popular in both literary and political circles. Brooke was educated at the Rugby school and went on to King’s College at Cambridge University, where he socialized in intellectual crowds with Virginia Woolf, John Maynard Keynes, W. B. Yeats, and the Bloomsbury writers. His later verse is considered some of the most important literary expressions of the First World War.

William Wordsworth (1770–1850) was an influential English poet who, with Samuel Taylor Coleridge, helped launch the Romantic Age of English literature with the 1798 joint publication of Lyrical Ballads. He was Britain’s Poet Laureate from 1843 until his death in 1850.

Emily Dickinson (1830–1886) was born in Amherst, Massachusetts. Throughout her life, she seldom left her house, and visitors were scarce. The people with whom she did come in contact, however, had an enormous impact on her thoughts and poetry. By the 1860s, she lived in almost total physical isolation from the outside world but actively maintained many correspondences and read widely. Her poetry reflects her loneliness, and the speakers of her poems generally live in a state of want, but her poems are also marked by the intimate recollection of inspirational moments which are decidedly life-giving and suggest the possibility of happiness. The first volume of her work was published posthumously in 1890 and the last in 1955.