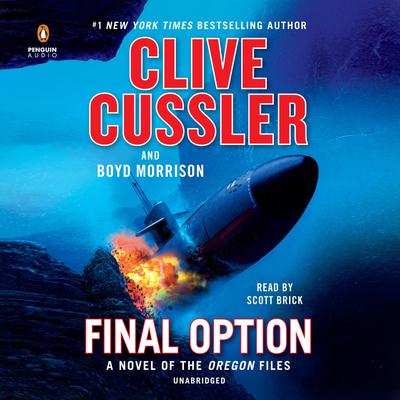 By Clive Cussler  and Boyd Morrison
Read by Scott Brick

In Final Option, Juan Cabrillo fights the worst enemy from his past to the terrifying and unexpected ending created by the Grand Master of Adventure, Clive Cussler, in the latest action-packed thriller in his #1 New York Times-bestselling series.

When the CIA realizes the identities of three American spies in Brazil have been compromised, they turn to Juan Cabrillo and the crew of the Oregon to rescue the agents. What seems a routine operation turns out to be a trap designed by Juan Cabrillo's greatest enemy, a man driven by hate to seek the ultimate revenge. At the heart of the plot is a state-of-the-art ship that is identical to the Oregon: same weaponry, same technology, same ability to evade capture. The only thing it doesn't have is Cabrillo and his talented crew. But will they be enough to go up against the one ship that rivals their own?

The crew of the Oregon must piece together a series of disturbing events, including the mysterious sinking of a nuclear attack submarine and the possible discovery of a WWII-era weapon that was thought to be lost in the jungles of Brazil, in the ultimate game of cat and mouse.

Boyd Morrison is an author, actor, and engineer. He started his career working on the NASA space station project. After earning a PhD in engineering from Virginia Tech, he used his training to develop US patents for various companies as well as manage video game testing for the Xbox division of Microsoft. Now a full-time writer, he has written several popular novels. He lives in Seattle.