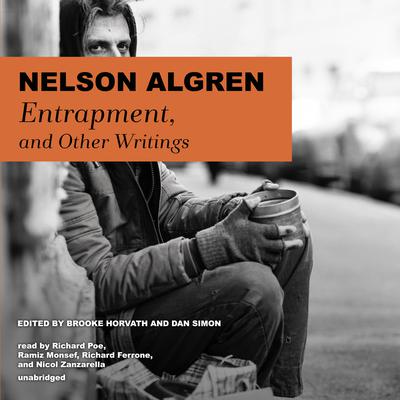 Entrapment, and Other Writings

Nelson Algren sought humanity in the urban wilderness of postwar America, where his powerful voice rose from behind the billboards and down tin-can alleys, from among the marginalized and ignored, the outcasts and scapegoats, the punks and junkies, the whores and down-on-their luck gamblers, the punch-drunk boxers and skid-row drunkies and kids who knew they’d never reach the age of twenty-one: all of them admirable in Algren’s eyes for their vitality and no-bullshit forthrightness, their insistence on living and their ability to find a laugh and a dream in the unlikeliest places.

In Entrapment and Other Writings—containing his unfinished novel and previously unpublished or uncollected stories, poems, and essays—Algren speaks to our time as few of his fellow great American writers of the 1940s and ’50s do, in part because he hasn’t yet been accepted and assimilated into the American literary canon, despite that he is held up as a talismanic figure. “You should not read [Algren] if you can’t take a punch,” Ernest Hemingway declared. “Mr. Algren can hit with both hands and move around and he will kill you if you are not awfully careful.”