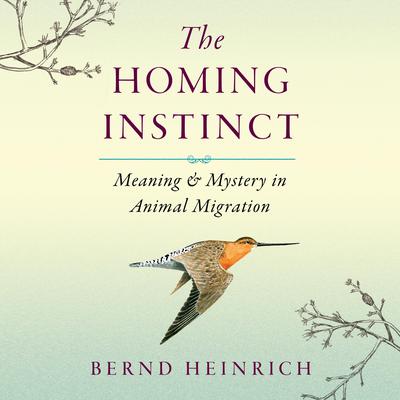 The Homing Instinct: Meaning and Mystery in Animal Migration

Acclaimed scientist and author Bernd Heinrich has returned every year since boyhood to a beloved patch of western Maine woods. What is the biology in humans of this deep-in-the-bones pull toward a particular place, and how is it related to animal homing?

Heinrich explores the fascinating science chipping away at the mysteries of animal migration: how geese imprint true visual landscape memory; how scent trails are used by many creatures, from fish to insects to amphibians, to pinpoint their home if they are displaced from it; and how the tiniest of songbirds are equipped for solar and magnetic orienteering over vast distances. Most movingly, Heinrich chronicles the spring return of a pair of sandhill cranes to their home pond in the Alaska tundra. With his trademark “marvelous, mind-altering” prose (Los Angeles Times), he portrays the unmistakable signs of deep psychological emotion in the newly arrived birds—and reminds us that to discount our own emotions toward home is to ignore biology itself.

Narrator Rick Adamson is proud to have presented several titles from author Bernd Heinrich. He is an Audie Award winner for his voicing of IN A HEARTBEAT, from the authors of the true story that became the film THE BLIND SIDE.  Around NYC and his home studio in New Jersey, he has worked in commercials, corporate and medical media, as well as educational content worldwide, for more than thirty years.

“Deep and insightful writing.” —Washington Post
“The content moves from story to story and is well suited to a wide audience. Adamson’s pacing keeps listeners engaged as he delivers scientific details, along with personal interludes. His varied inflections pull listeners into the natural world and the curious mind of Heinrich. Adamson also shines in delivering authentic-sounding conversations, particularly in the closing story about the human pull to return to one’s juvenile home. Winner of the AudioFile Earphones Award.” —AudioFile
“A graceful blend of science and memoir.” —Wall Street Journal
“Natural history fans will love this book. Its appeal is multilayered, with many fascinating instances of Heinrich’s fabled fieldwork and plenty of hard science.” —Library Journal (starred review)
“A noted naturalist explores the centrality of home in the lives of humans and other animals…A special treat for readers of natural history.” —Kirkus Reviews

Bernd Heinrich is an acclaimed scientist and the author of numerous award-winning books, including the bestselling The Mind of the Raven, Why We Run, and Winter World. Among his many honors is the 2013 PEN New England Award in nonfiction for Life Everlasting. Mind of the Raven won the John Burroughs Medal for Natural History Writing and was a finalist for the Los Angeles Times Book Prize. He is a frequent contributor to national media and professor emeritus of biology at the University of Vermont.