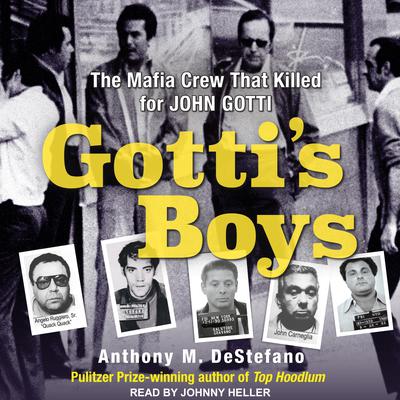 Gotti's Boys: The Mafia Crew That Killed For John Gotti

Pulitzer Prize–winning journalist Anthony M. DeStefano takes you inside John Gotti's inner circle to reveal the dark hearts and violent deeds of the most remorseless and cold-blooded characters in organized crime. Men so vicious even the other Mafia families were terrified of them. Meet Gotti's Boys . . .

● Charles Carneglia: the ruthless junkyard dog who allegedly disposed of bodies for the mob—by dissolving them in acid then displaying their jewels.

● Gene Gotti: the younger Gotti brother who ran a multimillion-dollar drug smuggling ring—enraging his bosses in the Gambino family.

● Angelo "Quack-Quack" Ruggiero: the loose-lipped contract killer who was wire-tapped by the FBI—and dared to insult Gotti behind his back.

● Tony "Roach" Rampino: the hardcore stoner who looked like a cockroach—and used his gangly arms and horror-mask face to frighten his enemies.

Anthony M. DeStefano has been a reporter for the past twenty years for Newsday in New York City, specializing in criminal justice and legal affairs. He is the author of The Last Godfather, King of the Godfathers, Mob Killer, The War on Human Trafficking, and Gangland New York, among others. He has appeared on Biography Channel programs as an expert on organized crime and also speaks at academic conferences about crime and human trafficking.