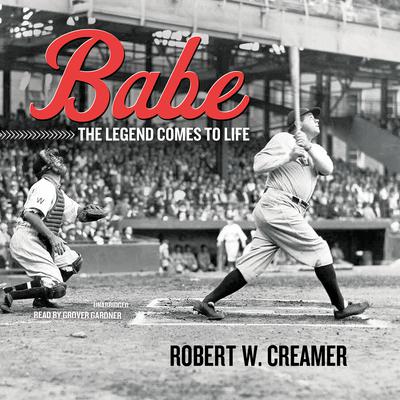 Babe: The Legend Comes to Life

He was the biggest man baseball has ever produced. Babe Ruth transcended the sport that brought him fame, money, and adulation, moving beyond the limits of baselines and outfield fences into the mainstream of American life.

In this extraordinary biography, Robert W. Creamer uncovers the complex and captivating man behind the legend. He presents the truth behind famous Ruth stories such as the "called shot" homers and the home run for a dying child, analyzes the astounding statistics with detailed information on specific games, and describes Ruth's varied and often volatile relations with those around him, from fellow players to fans, friends, and reporters.

From Babe Ruth's early days in a Baltimore orphanage, to the glory days with the Yankees, to his final years, Creamer has drawn an indelible portrait of a true sports hero.

“Perhaps the best portrait yet struck of an American sports hero.” —New York Times Book Review
“The first really adult biography of the Babe, as well as one of the best, and least sentimental, books about a great sports figure ever written.” —Time Magazine
“The best biography ever written about an American sports figure.” —Sports Illustrated
“This book does far more than tell the facts and myths of Babe Ruth’s life. It chronicles a time when baseball was played only on grass and a western road trip for East Coast teams meant a train ride to St. Louis.” —AudioFile

Robert W. Creamer is an American sportswriter and editor. He was one of the first hired on the staff of Sports Illustrated in 1954 and served the magazine as a senior editor until 1984. Also an accomplished author, he wrote the most definitive biography of Babe Ruth, entitled Babe, in 1974.