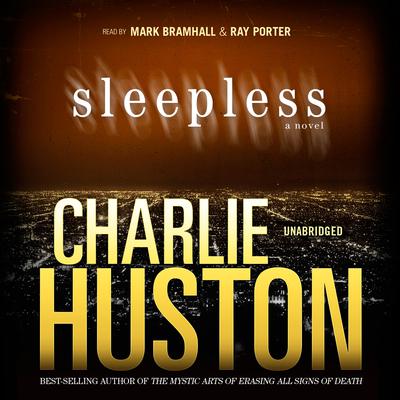 By Charlie Huston
Read by Ray Porter and Mark Bramhall

A Publishers Weekly Best Audiobook for the Year in Fiction

A Crime Reads Pick of Books Set during Plagues, Contagions, and Outbreaks

Every day, more and more people have been found to have contracted the illness. It reveals itself gradually, inhibiting sleep, eating away at one’s mind, birthing panic and confusion, until the final few months before death known as the suffering. The epidemic has swept the globe, and now infects one in ten people.

Straight-arrow cop Parker T. Haas is working undercover as a dealer in the black-market trade of Dreamer, the only known drug that offers relief for the sleepless. The drug is in small supply and impossibly high demand, and in his darker moments, Park admits to himself that his interest in it goes beyond the professional. His own wife, Rose, has been sleepless for months, and they haven’t yet found the courage to find out if their infant daughter is also sick. Though the stress at work and at home are weighing on him, Park presses on, feeling like he’s on the cusp of learning something crucial about the disease.

“One of the most remarkable prose stylists to emerge from the noir tradition in this century.” —Stephen King, #1 New York Times bestselling author
“Why stop at adapting genre conventions when you can re-invent the whole genre? That seems to be Charlie Huston’s modus operandi in Sleepless, a traditional police procedural neatly tucked into a stunningly original work of speculative fiction.” —New York Times
“The use of dual readers—Mark Bramhall and Ray Porter, as Jasper and Park respectively—helps to identify the points of view. For the cop, a former Stanford professor struggling to care for his family and do his job, Porter employs an intelligent voice tinged by bitterness and anxiety. But it’s Bramhall who’s given the plum assignment: Jasper is cool, cynical, dryly humorous, and always in control, even when faced with overwhelming odds. He’s an actor’s dream, and Bramhall’s dry, bemused, and at times darkly humorous delivery is stunning.” —Publishers Weekly (starred audio review)
“A writer as skilled as Huston can make an apocalyptic story terrifyingly plausible.” —Kirkus Reviews (starred review)
“I like assassins possessed of style, exceptional lethality, and unusual self-awareness. Jasper has all that, and more. He’s the best fictional assassin I’ve come across in a long time.” —Amazon.com
“Huston’s impressive, challenging thriller…will gain him a whole new readership.” —Publishers Weekly