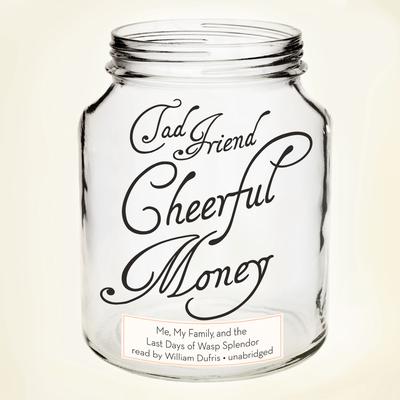 Cheerful Money: Me, My Family, and the Last Days of Wasp Splendor

Tad Friend’s family is nothing if not illustrious: his father was president of Swarthmore College, and at a Smith college poetry contest judged by W. H. Auden, his mother came in second—to Sylvia Plath. For centuries, Wasps like his ancestors dominated American life. But then, in the ’60s, their fortunes began to fall. As a young man, Friend noticed that his family tree, for all its glories, was full of alcoholics, depressives, and reckless eccentrics. Yet his identity had already been shaped by the family’s age-old traditions and expectations. Part memoir, part family history, and part cultural study of the long swoon of the American Wasp, Cheerful Money is a captivating examination of a cultural crack-up and a man trying to escape its wreckage.

“Cheerful Money, by a self-stinging Wasp, is sharp as well as blunt about this problematic caste, but also rather proud of its salty aspects. An insightful, highly humorous memoir, exceptionally well-written.” —Peter Matthiessen, author of Shadow Country
“American Wasps are now as rare as black truffles, and rarely has their story been told so candidly or entertainingly as it is in Tad Friend’s wonderful new memoir…Cheerful Money absolutely sings…This is a memorable hymn to a vanishing America. Exceptionally warm-hearted, full of good cheer, and ruthlessly funny, it may even have you singing along.” —Washington Post
“In a milieu that values decorum and reticence, revealing private family matters requires gumption—or, in Wasp-speak, ‘sand.’ Tad Friend shows the necessary grit in this suave, sharp-witted exposé of his native culture…[writing] with minimal whining and considerable style and soul.” —NPR, The Year’s Best Memoirs
“Cheerful Money offers a deadpan defense of the Wasp culture whose outline it simultaneously traces…pays homage to that stiff upper lip as more pervasive, complex, and ultimately beneficial than a mere question of upbringing.” —AV Club
“Friend knows exactly how privileged he is and recognizes that readers won’t easily feel sorry for someone who can spend more than $160,000 on therapy…Instead of asking for sympathy, he works at showing how his efforts at emotional integration have begun to pay off, including the relationship with his own wife and children, in a story of cross-generational frustration and reconciliation that transcends class boundaries.” —Publishers Weekly
“A multi-generational portrait of his family, an impressive set of Wasps whose ancestors include a signer of the Declaration of Independence…Friend sprinkles hilarious aphorisms throughout the text…funny and enlightening.” —BookPage
“In Tad Friend’s stunning memoir about the lost world of the Wasp elite, the Hamptons’ Georgica Pond comes to seem as Edenic as Thoreau’s Walden. Friend animates a deeply private, aristocratic way of life with detailed, moving intimacy.” —Susan Cheever
“With its Waspish brew of aunts, alcoholics, and dashed promise (not to mention an assortment of Inkys, Wassas, Lettys, Goggys, and Hannys), Cheerful Money goes down like a bittersweet late-summer cocktail made with a jigger of Cheever and a splash of Wodehouse.” —Graydon Carter

Tad Friend is a staff writer at the New Yorker, where he writes the magazine’s “Letter from California.” Prior to that, he wrote regularly for Outside, New York, and Esquire and wrote travel stories from all seven continents. He plays golf and squash and watches a lot of television. He lives in Brooklyn with his wife, Amanda Hesser, and their children, Walker and Addie.