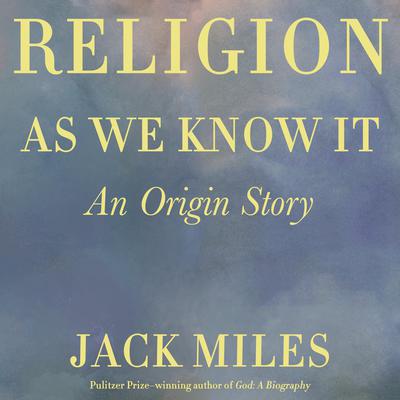 Religion as We Know It: An Origin Story

A brief, beautiful invitation to the study of religion from a Pulitzer Prize winner

How did our forebears begin to think about religion as a distinct domain, separate from other activities that were once inseparable from it? Starting at the birth of Christianity—a religion inextricably bound to Western thought—Jack Miles reveals how the West's "common sense" understanding of religion emerged and then changed as insular Europe discovered the rest of the world. Finally, in a moving postscript, he shows how this very story continues today in the minds and hearts of individual religious or irreligious men and women.

“Miles…offers a quick, sophisticated dash through world history.” —New York Times Book Review
“This is an exceptional work that challenges and rewards careful reading and thought. It belongs in every library.” —Booklist (starred review)
“Jack Miles has written the perfect first book for religious studies beginners. He starts with the widely held American understanding of religion but ends arguing brilliantly that inescapable human ignorance creates the possibility of welcoming the new, the unexpected, even the religious. Our self-absorbed age needs this book.” —Mark C. Taylor, Columbia University

Jack Miles is a writer whose work has appeared in numerous national publications, including the Atlantic Monthly, the New York Times, the Boston Globe, the Washington Post, and theLos Angeles Times. He earned a PhD in Near Eastern languages from Harvard University and is a former Jesuit. His first book, God: A Biography, won a Pulitzer Prize and has been translated into fifteen languages. He is senior advisor to the president of the J. Paul Getty Trust, a foundation supporting art and scholarship.