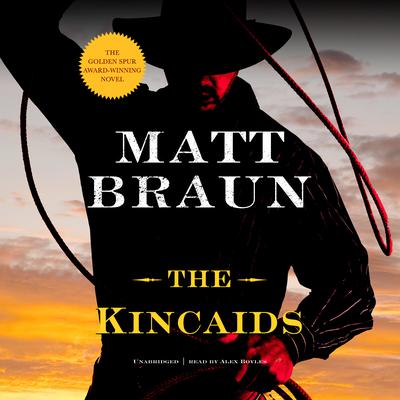 Winner of the Golden Spur Award

The classic, Golden Spur Award–winning novel of a man, a family, and a nation

He came off the frontier: a buffalo hunter, a gambler, a loner. In Abilene he won a saloon at cards and earned the fear of a lawless town. From then on, Jake Kincaid would not be stopped. He began a rampage of ambition and deal-making that forever changed a land called Kansas and the Indian Territories. But along the way the deeds and misdeeds of Jake Kincaid affected more than the frontier—they shaped the lives of his two sons. One who became a lawman. One who became an outlaw. Both destined to come face-to-face behind blazing guns …

From Wild Bill Hickok to the Dolan outlaw gang to Teddy Roosevelt’s Rough Riders, The Kincaids tells the classic saga of America at its most adventurous—through the eyes of three generations who made laws, broke laws, and became legends in their time.

“The Kincaids… celebrates not the birth of a nation, but its violent, vigorous coming of age.” —Columbia Magazine
“Believable characters and a swift hard plot.” —Kirkus Reviews
“Matt Braun is one of the best!” —Don Coldsmith, author of the Spanish Bit series, praise for the author
“Matt Braun has a genius for taking real characters out of the Old West and giving them flesh-and-blood immediacy.” —Dee Brown, #1 New York Times bestselling author, praise for the author