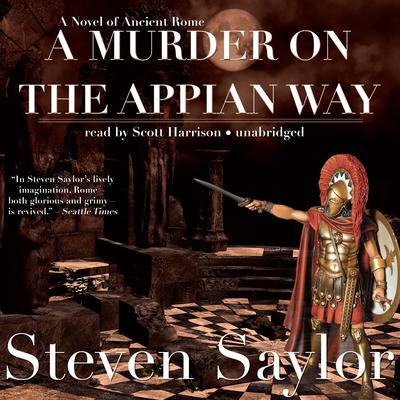 A Murder on the Appian Way

Ancient Rome has been in a state of turmoil as the rival gangs of Publius Clodius, a high-born, populist politician, and his arch-enemy, Titus Milo, have fought to control the consular elections. When Clodius is murdered on the famed Appian Way and Milo is accused of the crime, the city explodes with riots and arson, and even the near sacrosanct Senate House is burned to the ground.

As accusations and rumors fly, Gordianus the Finder, whose famed investigative skills and integrity make him sought after by all sides in the escalating conflict, is charged by Pompey the Great with discovering what really happened. Who is really responsible for Clodius’ death? And should his murderer be despised as a villain or hailed as a savior of the Republic?

“Gordianus has wisdom and prudence; Saylor has intelligence, wit, and insight. Saylor has acquired the information of a historian but he enjoys the gifts of a born novelist.” —Boston Globe
“In Steven Saylor’s lively imagination, Rome—both glorious and grimy—is revived.” —Seattle Times
“An unusual and morally sturdy character, Gordianus is honest without being sanctimonious, a savvy observer of the political scene who never loses his integrity…The suspense never lags as Saylor spins a sophisticated political thriller that also brings his readers up to speed on their Roman history.” —Publishers Weekly
“The plotting is deft and the action—both physical and intellectual—is nonstop.” —Amazon.com, editorial review
“Another irresistible installment in the continuing chronicles of Gordianus the Finder…Gripping suspense and intrigue superbly supported by a wealth of accurate historical detail.” —Booklist