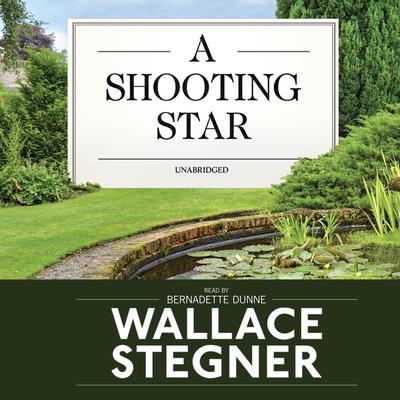 Sabrina Castro is a wealthy, attractive woman with a strong New England heritage who is married to an older California physician who no longer fulfills her dreams. As she seeks the meaning of love, an almost accidental misstep leads her down the path of moral disintegration, until there is no place for her to go except up and out. How she comes to terms with her life is the theme of this absorbing personal drama played out against the backdrop of an old Peninsula estate where her mother lives among her servants, her memories of Boston, and her treasured family archives. Now on audio for the first time, A Shooting Star displays the storytelling powers that Wallace Stegner’s fans have enjoyed for more than half a century.

Wallace Stegner (1909–1993) wrote many books of fiction and nonfiction, including Crossing to Safety and the National Book Award–winning The Spectator Bird. Angle of Repose won the Pulitzer Prize in 1972. An American historian, novelist, short story writer, and environmentalist, Stegner was often called the “dean of Western writers” and has left a lasting legacy in the literary community.