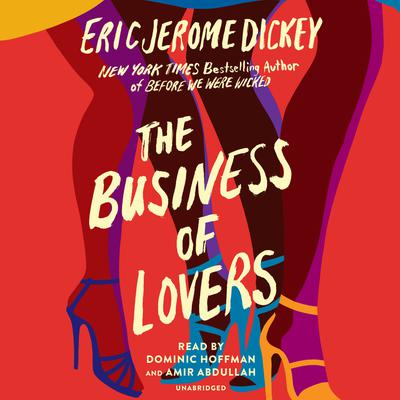 The Business of Lovers: A Novel

All is fair in love and lust in New York Times bestselling author Eric Jerome Dickey’s tale of two brothers, four women, and the business of desire.

Unlike their younger brother, André, whose star as a comedian is rising, neither Dwayne nor Brick Duquesne is having luck with his career—and they’re unluckier still in love. Former child star Dwayne has just been fired from his latest acting role and barely has enough money to get by after paying child support to his spiteful former lover, while Brick struggles to return to his uninspiring white-collar job after suffering the dual blows of a health emergency and a nasty breakup with the woman he still loves.

Neither brother is looking to get entangled with a woman anytime soon, but love—and lust—has a way of twisting the best-laid plans. When Dwayne tries to reconnect with his teenage son, he finds himself fighting to separate his animosity from his attraction for his son’s mother, Frenchie. And Brick’s latest source of income—chauffeur and bodyguard to three smart, independent women temporarily working as escorts in order to get back on their feet—opens a world of possibility in both love and money. Penny, Christiana, and Mocha Latte know plenty of female johns who would pay top dollar for a few hours with a man like Brick... if he can let go of his past, embrace his unconventional new family, and allow strangers to become lovers.

Eric Jerome Dickey paints a powerful portrait of the family we have, the families we create, and every sexy moment in between.

Dickey sets in motion a fascinating cast of characters and creates compelling arcs for their stories.... Readers will be cheering for the kindhearted Ken and his family in this dark yet ultimately hopeful novel. —Booklist on Bad Men and Wicked Women
Quentin Tarantino’s Pulp Fiction comes to mind as Swift and Ellis cruise through Los Angeles’s wealthy neighborhoods debating issues of racism, inner-city poverty, and the lingering effects of slavery.... Suspense builds with an action-packed finale, and Dickey’s many fans will eagerly consume this. —Library Journal on Bad Men and Wicked Women
Before We Were Wicked is a masters class in relationship drama…a literary feast! —Smexy Books
“Eric Jerome Dickey is the best thing going in fiction now in terms of writing stories that blend action with sensuality.... Dickey’s penchant for creating fiction that resonates with the forbidden overtakes us—these elements of danger and lust dominating each and every passage. At its best moments, Bad Men and Wicked Women recalls bits and pieces of the famed HBO series The Sopranos as we come to drench ourselves in the types of secrets many families harbor but seldom share. —Electric Review “Dickey steadily generates a taut, deadly atmosphere throughout the book, and readers will not be able to predict who will be the last man standing.
“An epic story about an epic quartet [of friends]. —Essence on The Blackbirds
“[An] empowering story of four women friends . . . [featuring] relatable voices and feelings to difficult issues. —Booklist on The Blackbirds
“In this sensual tale, words stoke the body and the imagination. With prose that is both witty and current, Dickey chronicles the pothole-filled journey four modern black women take to find love. —Kirkus on The Blackbirds
Nobody currently publishing today writes sex better than Eric Jerome Dickey. —Electric Review on Before We Were Wicked
"A passion-filled prequel that puts a new spin on the familiar conflicts that have made him a household name. —Essence on Before We Were Wicked
"[A] heartfelt erotic drama.... the setting is artfully crafted, the characters’ struggles are real and moving, and the sex those characters have is flaming hot. —Publishers Weekly on The Business of Lovers
“Dickey has the knack for creating characters who elicit both rage and sympathy. —Entertainment Weekly
Best-selling author of street-wise romance Dickey’s latest is a contemporary erotic tale of ambitions delayed. —Booklist on The Business of Lovers
“In this sensual road trip across LA there are deep conversations, adult situations, and a sweet love story at every turn. —Kirkus on The Business of Lovers
The love story Dickey tells…is potent. Readers will want to read Bad Men and Wicked Women again after being immersed in this edgy, emotional adventure. —Booklist on Before We Were Wicked
From wanton to wicked, the love-hate relationship between Dickey's characters burns with rapid-fire dialogue and plenty of steam. —Kirkus on Before We Were Wicked
“Dickey’s fans flock to his readings.... He’s perfected an addictive fictional formula. —The New York Times

Eric Jerome Dickey (1961—2021) was the multiaward-winning author of many novels, including eleven of which made the New York Times bestsellers list. He also wrote a six-issue miniseries of graphic novels for Marvel Enterprises, featuring Storm (X-Men) and the Black Panther. He was the 2012 Black Expressions male author of the year.