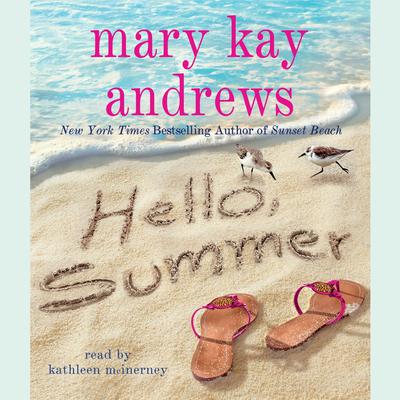 "Kathleen McInerney narrates a charming story that transports listeners to the sunny beaches of Florida...McInerney slips a slight Southern accent into her narration that works well." -- AudioFile Magazine New York Times bestselling author and Queen of the Beach Reads Mary Kay Andrews delivers her next blockbuster, Hello Summer. It’s a new season... Conley Hawkins left her family’s small town newspaper, The Silver Bay Beacon, in the rearview mirror years ago. Now a star reporter for a big-city paper, Conley is exactly where she wants to be and is about to take a fancy new position in Washington, D.C. Or so she thinks. For small town scandals... When the new job goes up in smoke, Conley finds herself right back where she started, working for her sister, who is trying to keep The Silver Bay Beacon afloat—and she doesn’t exactly have warm feelings for Conley. Soon she is given the unenviable task of overseeing the local gossip column, “Hello, Summer.” And big-time secrets. Then Conley witnesses an accident that ends in the death of a local congressman—a beloved war hero with a shady past. The more she digs into the story, the more dangerous it gets. As an old heartbreaker causes trouble and a new flame ignites, it soon looks like their sleepy beach town is the most scandalous hotspot of the summer. A Macmillan Audio production from St. Martin's Press

"Hello, Summer is another gem by the always wonderful Mary Kay Andrews.” —Pop Sugar
“Andrews can be counted on for beach-worthy depictions of southern women with chutzpah and a talent for finding trouble with humor and romantic interest mixed in. Fans of Elin Hilderbrand and Kristy Woodson Harvey shouldn’t miss it.” —Booklist

Mary Kay Andrews is a New York Times bestselling author with numerous critically acclaimed novels, notably the Callahan Garrity mysteries. She earned a degree in journalism from the University of Georgia and worked for more than a dozen years as a reporter, mainly at the Atlanta Journal-Constitution.