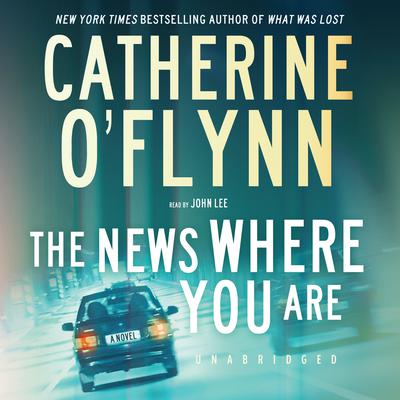 The News Where You Are

Frank Allcroft, a television news anchor in his hometown, is on the verge of a midlife crisis. Beneath his famously corny on-screen persona, Frank is haunted by loss: the mysterious hit-and-run that killed his predecessor and friend, Phil, and the ongoing demolition of his architect father’s monumental postwar buildings. And then there are the things he can’t seem to lose, no matter how hard he tries: his home, for one, on the market for years; and the nagging sense that he will never quite be the son that his mother—newly ensconced in an assisted-living center—wanted. As Frank uncovers the shocking truth behind Phil’s death and comes to terms with his domineering father’s legacy, it is his beloved young daughter, Mo, who points him toward the future. This spirited literary mystery is a funny and moving exploration of what we do and don’t leave behind.

“The News Where You Are is a stunning accomplishment, a page-turner shot through with O’Flynn’s compassion and electrifying wit. O’Flynn gives us an unflinching vision of profound loss without ever losing her sense of humor; she shows us that the haunted corridors of the heart can also echo with laughter.” —Karen Russell, New York Times bestselling author of Swamplandia! and St. Lucy’s Home for Girls Raised by Wolves
“The News Where You Are establishes [O’Flynn] as, let’s say, the JG Ballard of Birmingham…It is a most moving book…O’Flynn comes across as the mistress of compassion…This [is a] blend of Dickens and Alan Bennett, written in the kind of stripped-down, flat style that so suits its time and place. I loved it, and am haunted by it.” —Guardian (Manchester)
“Catherine O’Flynn’s narratives of urban disenchantment answer the challenge for novelists to take the ordinary and make it compelling…Tenderly portrayed, like all O’Flynn characters, [Frank] is far more interested in the invisible lives of people beyond the news…O’Flynn’s eye for the quotidian ridiculous is sharp enough to rank her with Mark Haddon and Marina Lewycka—comic novelists worth taking seriously…This funny, moving novel reflects back to us our everyday selves.” —Independent (London)
“Seriously uplifting. It’s a funny, moving, acutely observed story about family and loss, getting old and being alone. That it also manages to take in British architecture and urban space and the problems of celebrity culture, while being disarmingly easy to read, is testament to Catherine O’Flynn’s comic timing and lightness of touch…Her great strength is to take characters who are, in a way, familiar, who could be annoying, perhaps even pathetic, and to invest them with a palpable humanity and dignity…A pleasurable, satisfying gem of a novel.” —Scotland on Sunday (Edinburgh)
“Author of the critically acclaimed What Was Lost, O’Flynn tends to focus on what people discard, on those people and things that have been passed by and forgotten. Here, Frank identifies with them and lets them know that they are not invisible to him. A sometimes humorous and always compassionate novel about approaching the fear of going out of style and becoming obsolete, with the perspective that history and memories afford.” —Library Journal book review
“In O’Flynn’s novel…the dominant themes of secrets and loss might have made for an immensely sad tale were it not for O’Flynn’s adept use of humor, particularly in her depiction of Frank’s daughter, Mo, and her child’s-eye view of such worldly topics as aging, demolition, and moving on. Versatile British narrator John Lee captures the novel’s varied spirits well. More a character study than a mystery, this title is appropriate for the larger fiction collections of libraries seeking shorter novels for their clientele.” —Library Journal audio review
“The News Where You Are is a compelling, moving and wonderful exploration of what it means to age, of how our sense of ourselves changes in ways we would never expect and can’t always control. O’Flynn writes with a humor and subtle grace that underscores the urgency with which her characters approach their own ends.” —Steven Galloway, author of The Cellist of Sarajevo
“O’Flynn’s novel is an evocative study of human nature with all its flaws and virtues…Narrator John Lee’s…charming British accent and full-voiced narration engage the listener and are well suited to the storyline.” —SoundCommentary.com

Catherine O’Flynn’s debut novel, What Was Lost, won the Costa First Novel Award in 2007, was shortlisted for the Guardian First Book Award, and was longlisted for the Booker Prize and the Orange Prize. She lives in Birmingham, England.