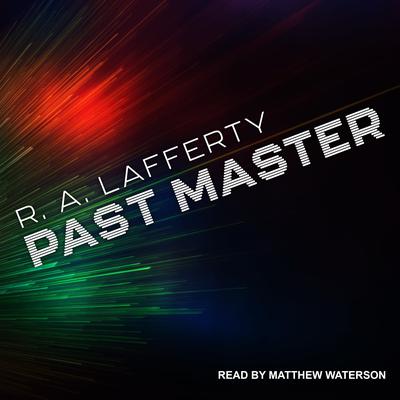 Wolf Hall meets The Man in the High Castle in this mind-bending science fiction classic.

Plucked from time, Sir Thomas More arrives on the human colony of Astrobe in the year 2535 AD, where there is trouble in utopia: can he and his motley followers save this golden world from the Programmed Persons, and the soulless perfection they have engineered? The survival of faith itself is at stake in this thrilling, uncategorizable, wildly inventive first novel—but the adventure is more than one of ideas. As astonishingly as Philip K. Dick and other visionaries of the 1960s new wave, Lafferty turns the conventions of space-opera science fiction upside-down and inside-out. Here are fractured allegories, tales-within-tales, twinkle-in-the-eye surprises, fantastic byways, and alien subjectivities that take one's breath away. Neil Gaiman has described Lafferty as "a genius, an oddball, a madman"; Gene Wolfe calls him "our most original writer." Past Master, long-hailed by insiders and now with an introduction by Andrew Ferguson, deserves to perplex and delight a wider audience.

Raphael Aloysius Lafferty (1914–2002) was an American science fiction and fantasy writer known for his original use of language, metaphor, and narrative structure, as well as for his etymological wit. He also wrote a set of four autobiographical novels, In a Green Tree; a history book, The Fall of Rome; and several novels of historical fiction. He was nominated for the Hugo, Nebula, and World Fantasy Awards and, in 1990, Lafferty received a World Fantasy Lifetime Achievement Award.