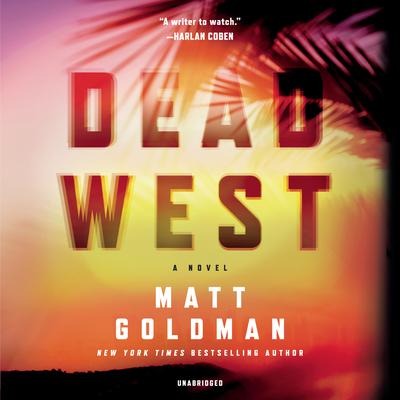 In the words of Lee Child on Gone to Dust, “I want more of Nils Shapiro.” New York Times bestselling and Emmy Award–winning author Matt Goldman happily obliges by bringing the Minneapolis private detective back for another thrilling, standalone adventure in Dead West.

Nils Shapiro accepts what appears to be an easy, lucrative job: find out if Beverly Mayer’s grandson is foolishly throwing away his trust fund in Hollywood, especially now, in the wake of his fiancée’s tragic death. However, that easy job becomes much more complicated once Nils arrives in Los Angeles, a disorienting place where the sunshine hides dark secrets.

Nils quickly suspects that Ebben Mayer’s fiancée was murdered, and that Ebben himself may have been the target. As Nils moves into Ebben’s inner circle, he discovers that everyone in Ebben’s professional life―his agent, manager, a screenwriter, a producer―seem to have dubious motives at best.

With Nil’s friend Jameson White, who has come to Los Angeles to deal with demons of his own, acting as Ebben’s bodyguard, Nils sets out to find a killer before it’s too late.

Matt Goldman is an Emmy Award–winning television writer, also nominated for a Writer’s Guild Award for his work on Seinfeld. His first novel, Gone to Dust, was selected for the Texas Lariat Reading List and was chosen as the Twin Cities Reader’s best novel of 2017.