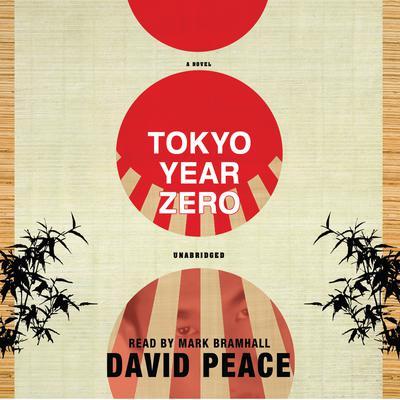 Winner of the Publishers Weekly Listen-Up Award in 2010

On August 15th, 1946, the first anniversary of the Japanese surrender, the partially decomposed bodies of two women are found in the ruins of Z┼ìj┼ìji Temple in central Tokyo. They have been raped and strangled—and they are only the first. More will be found killed in the same way—and, it will become clear, by the same hand.

Narrated by the irreverent, angry, despairing yet determined Detective Minami of the Tokyo Metropolitan Police,Tokyo Year Zerotells the riveting, complex story of the hunt for Kodaira Yoshio—known as the Japanese Bluebeard—a decorated former Imperial soldier who raped and murdered at least ten women amidst the turmoil of Tokyo between May 1945 and August 1946. And it is the story of Detective Minami, chasing down, and haunted by, his own memories of atrocities that he can no longer explain or forgive.

It is also a chilling portrait of a city—and a nation—going through a hellish period in its history: the despair and shame of its citizens, the disintegration of the social fabric, the physical devastation of the landscape. The novel takes place in a noir, twilight world, and shows us the terrifying contrast between the polite, highly codified society of Japan and the painful rawness beneath.

A story told with demanding power, written in a telegraphic, darkly lyrical language, shot through with wry humor, unblinking in its vision of the chaos left in the wake of war and of the moral and psychological corruption it engenders—Tokyo Year Zerois blistering and unforgettable, a stunningly original crime novel.

“Tokyo Year Zero is part historical stunner, part Kurosawa crime film, an original all the way. David Peace's depiction of a war-torn metropolis both crumbling and ascendant is peerless, and the story itself is beautifully wrought.” —James Ellroy
“David Peace has joined a select group of novelists who are transforming the crime genre with passion and style.” —George Pelecanos
“David Peace is the English James Ellroy.” —Ian Rankin
“Brilliant, perplexing, claustrophobic, and ambiguous…There is constant oscillation between waking and dreaming, past and present, memory and fantasy…At the heart of the novel is the…telling glimpse of the human soul.” —New York Times Book Review
“Tokyo Year Zero is Peace’s most accessible work, the culmination of years of fine-tuning his idiosyncratic voice to its truest frequency…What we have here is not just a novel with voice…but also with rhythm, which must be learned and sharpened by the writer and is extraordinarily difficult to get right…Astounding.” —Los Angeles Times Book Review
“British crime fiction’s most exciting new voice in decades.” —GQ
“The detective’s search for the meaning of the crime is also a search for the meaning of existence in the aftermath of defeat. It is a sign of Peace’s formidable powers as a novelist that he can make us care about his principal character and his society even when it seems as if neither Minami nor Tokyo in its year zero can find redemption in the answers.” —Telegraph (London)
“A writer can be psychologically penetrating, or socially significant, or spooky as hell. Noir novelists drench the whole affair in atmosphere. And then there is David Peace’s method—which is to be all these things, all at once…Once this hellish locomotive of a book hooks onto its tracks it becomes difficult to hop off.” —San Francisco Chronicle
“Peace weaves a thriller that is both a gory psychological whodunit and a meditation on the origins of modern Japan…[his] staccato prose is a perfect instrument for this interior hell…Peace is nothing if not ambitious; he thinks in epic terms.” —Guardian (London)
“Riveting…Peace, whose complex style feels like a cross between Haruki Murakami and James Ellroy, delivers an expressionistic portrait of a harrowing, devastated time and place.” —Publishers Weekly (starred review)
“In [David Peace’s] Occupied City, six readers did an exceptional job. Here, Mark Bramhall is just as effective operating solo. Not only does he create distinctive accented voices for a large, diverse cast—including the depressed, driven Minami; his weary, submissive wife; bombastic bosses; a sarcastic partner and a growling sadistic gang lord—Bramhall vocalizes gun shots and animal sounds. Even more important, he aids the author in summoning a mood of desolation and desperation that falls like fog over a war-ravaged, conquered city.” —Publishers Weekly (audio review)
“Mark Bramhall’s narration is sympathetic, delivering the repetition and wordplay poetically…perfect in style and pace.” —AudioFile

David Peace is the author of the Red Riding Quartet series and was chosen as one of Granta's Best of Young British Novelists in 2003. He is the author of six previous novels, published in the UK: the four novels of the Red Riding Quartet, GB84, and The Damned Utd. He was born and raised in West Yorkshire and now lives in the East End of Tokyo with his wife and children.