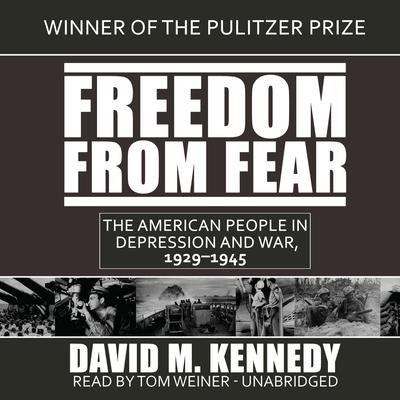 Freedom from Fear: The American People in Depression and War, 1929–1945

Winner of the 2000 Pulitzer Prize for History

Winner of the 2000 Ambassador Book Award for American Studies

Winner of the 2000 Parkman Prize

Winner of the 1999 Choice Award for Outstanding Academic Title

Winner of the 1999 California Gold Medal for Literature: Nonfiction

Between 1929 and 1945, two great travails were visited upon the American people: the Great Depression and World War II. This Pulitzer Prize–winning history tells the story of how Americans endured, and eventually prevailed, in the face of those unprecedented calamities.

The Depression was both a disaster and an opportunity. As David Kennedy vividly demonstrates, the economic crisis of the 1930s was far more than a simple reaction to the alleged excesses of the 1920s. For more than a century before 1929, America's unbridled industrial revolution had gyrated through repeated boom-and-bust cycles, wastefully consuming capital and inflicting untold misery on city and countryside alike.

Freedom from Fear explores how the nation agonized over its role in World War II, how it fought the war, why the United States won, and why the consequences of victory were sometimes sweet, sometimes ironic. In a compelling narrative, Kennedy analyzes the determinants of American strategy, the painful choices faced by commanders and statesmen, and the agonies inflicted on the millions of ordinary Americans who were compelled to swallow their fears and face battle as best they could.

Both comprehensive and colorful, this account of the most convulsive period in American history, excepting only the Civil War, reveals a period that formed the crucible in which modern America was formed.

“We expect the best from David Kennedy and he will not disappoint anybody…A major and thoroughly fine piece of work.” —John Kenneth Galbraith, New York Times bestselling author
“An engrossing narrative of a momentous time. The best one-volume account of the Roosevelt era currently available…Good old-fashioned history.” —New York Times Book Review
“David Kennedy is one of America’s most distinguished historians, and Freedom from Fear is a remarkable achievement: deeply researched, insightful, and beautifully written. Fast-paced, it presents vivid portraits of major actors such as Roosevelt, Churchill, and Hitler, as well as of the hopes and fears of millions of lesser-known people caught up in the tumultuous years of the Great Depression and of World War II.” —James T. Patterson, Bancroft Prize–winning author of Grand Expectations
“From its dramatic prelude…to its moving climax…this panoramic narrative pulses with life, color, incident, and action. We know how it all comes out, yet the fate of the nation seems to hang in the balance as Kennedy captures history’s throat-catching contingency.” —Jack Beatty, author of The World According to Peter Drucker
“Rarely does a work of historical synthesis combine such trenchant analysis and elegant writing as does Kennedy’s spectacular contribution to the Oxford History of the United States…Because of its scope, its insight and its purring narrative engine, Kennedy’s book will stand for years to come as the definitive history of the most important decades of the American century.” —Publishers Weekly
“As Franklin Roosevelt said at his inauguration in 1932, ‘The only thing we have to fear is fear itself.’ The Great Depression was destroying America, and voters elected Roosevelt to save the country. The initials of New Deal programs—the WPA, CCC, and NRA—became common vocabulary but did little to cure unemployment. The recovery of the US economy came with WWII and the gearing up to fight a two-ocean war. Narrator Tom Weiner transforms the author’s Pulitzer Prize–winning prose into a 32-hour experience worth every minute of listening. Weiner’s brisk and sonorous delivery keeps the interest level high without missing a well-chosen word. Both he and the author speak the language of the war in its vast reaches. Winner of AudioFile Earphones Award.” —AudioFile
“Displaying a literary craft uncommon in survey works, he has woven together narrative, sketches of character, and critical judgment to record and analyze the economic, political, social, and military events of these epic years…This account of the crucial struggles and events of the Depression and war years will lend perspective like few others.” —Library Journal
“A major achievement in objective historical writing that should be a legacy to generations of students seeking authoritative reference material on the period.” —Kirkus Reviews
“One of our most broad-gauged American historians brings us that increasing rarity: a big book about a big subject…The Stanford scholar takes on the job of tracing the American people through three of the most important and widely written about epochs in the century…and provides us with consistently original and sometimes startling conclusions.” —Washington Post
“Kennedy skillfully weaves together the era’s social, economic, and political strands. Even those who thought they knew it all, or who indeed lived through all or most of these years, will find illuminating information and insights on almost every page.” —Los Angeles Times Book Review
“Splendid…It is a worthy addition to the multi-volume Oxford History of the United States and deserves to become the standard work of introduction to its three subjects—the Depression, the New Deal, and America’s part in the second world war…Mr. Kennedy is master of his material in a double sense. He exhibits a comprehensive knowledge of events, making very few factual slips...The benefit, in terms of clarity, is immense…This is one of the most valuable forms of scholarly originality, and it will make itself felt over a long time.” —Economist
“A grand historical synthesis…the kind of book prizes are made for.” —Chicago Tribune
“This is modern America’s story—modern America’s most thrilling, most irresistible, and most significant story—and in this massive volume, David M. Kennedy makes it his story in a way that no one has before. Freedom from Fear, the fourth installment of the new Oxford History of the United States to appear, is as much a triumph as its predecessors, providing every indication that the series, once completed, will stand as the most comprehensive and most compelling narrative history of the nation.” —Boston Globe
“Kennedy’s grasp of deep-rooted social problems and his enlightening, analytical style are very much in evidence…His narrative style is in the grand tradition of American historical writing, an unfaltering display of clarity and detail.” —Philadephia Inquirer
“Kennedy’s book is the most illuminating, riveting, comprehensive, and graceful one-volume history of this nation’s experiences during the Great Depression, New Deal, and WWII published to date…This is social, political, diplomatic, and military history written magisterially with broad but nuanced strokes across a sixteen-year span that utterly transformed the lives of Americans and the world…Librarians should order this book for their libraries, faculty members should assign it, and everyone should read it.” —Choice

David M. Kennedy is the author of Freedom from Fear, which won the 2000 Pulitzer Prize for History; Over Here: The First World War and American Society, which was nominated for a Pulitzer Prize; and Birth Control in America: The Career of Margaret Sanger, which won a Bancroft Prize. He is the Donald J. McLachlan Professor of History at Stanford University.