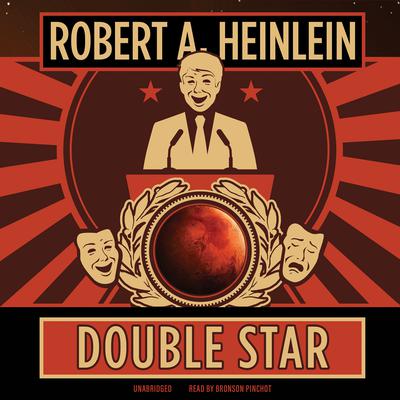 Every stand-in dreamed of the starring role—but what actor would risk his life for the chance?

One minute, down-and-out actor Lorenzo Smythe is, as usual, in a bar, drinking away his troubles while watching his career circle the drain. Then a space pilot buys him a drink, and the next thing Smythe knows, he’s shanghaied to Mars. Smythe suddenly finds himself agreeing to the most difficult role of his career: impersonating an important politician who has been kidnapped. Peace with the Martians is at stake, and failure to pull off the act could result in interplanetary war.

Smythe knows nothing of the issues concerning free interplanetary trade and equal rights for aliens and cares even less, but the handsome compensation is impossible to refuse. He soon realizes, however, that he faces a lifetime masquerade if the real politician never shows up.

“Not too far flung nor far fetched.”  —Kirkus Reviews
“In this intricately plotted novel of interplanetary intrigue, Heinlein is at his best.” —St. Louis Post-Dispatch
“The story moves at a sharp pace, helped along by Heinlein’s slick prose and the kind of wry good humor demonstrated when he describes the multiconsonant names he has ascribed to his Martians as sounding like ‘a leaking faucet.’” —The Guardian (London)
“In Double Star you can smell and feel and practically taste the future.” —Chicago Tribune