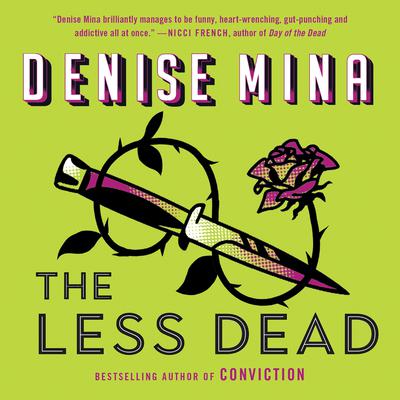 In this shocking thriller from the talented Denise Mina, Margot finally learns her birth mother’s identity, only to discover that the killer is still at large—and sending threatening letters.

Margot is having a thirty-something crisis: She’s burning out at work, a public health practice; she’s just left her longtime boyfriend after discovering he was cheating; and her mother recently died. The only silver lining to her mother’s death is that Margot, who was adopted, can finally go looking for her birth mother.

What she finds is an incomplete family—the only person left is Nikki, her mother’s older sister. Aunt Nikki brings upsetting news: Margot’s mother is dead, murdered many years ago, one of a series of sex workers killed in Glasgow. The killer—or killers?—has never been found, Aunt Nikki claims. They’re still at large and sending her letters, gloating letters with details of the crime. Now Margot must choose: take the side of the world against her dead mother, or investigate her murder and see that justice is done at last.

Darkly funny and sharply modern, The Less Dead is an indelible, surprisingly moving story of daughters and mothers, blood family and chosen family, and how the search for truth helps one woman to find herself.

“Riveting…Mina is matchless at building suspicion and creeping dread. A bold and bracing twist on the fallen-woman-as-victim story.” —Kirkus Reviews
“The menacing atmosphere…effectively supports the novel’s themes of reconciliation, class divides, and violence against women. Mina is a master of the genre, with wide appeal, especially for those who appreciate character-driven stories with literary weight, like those of Tana French, Karin Slaughter, and Laura Lippman.” —Booklist (starred review)