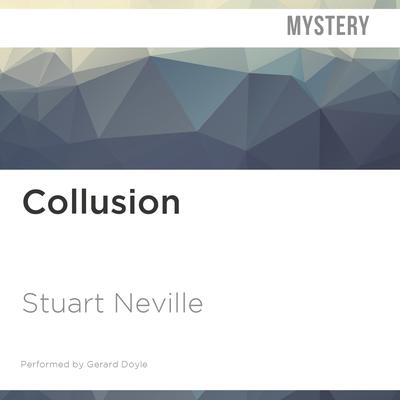 From the LA Times Book Award-winning author of The Ghosts of Belfast, Stuart Neville, comes the exciting sequel: Collusion

Collusion returns listeners to Belfast, where a new mystery haunts its underbelly. Jack Lennon is a Detective Inspector trying to track down his former lover, Marie McKenna, and their daughter, but his superiors tell him to back off. Bull O'Kane is a bitter old man who will stop at nothing for vengeance. The Traveller is an assassin without pity or remorse, who stalks Belfast, tying up loose ends. Forced into the center of it all is former IRA paramilitary Gerry Fegan, who must confront his past - and The Traveller - for the fight of his life.

The early reviews for Collusion are just as strong as those for The Ghosts of Belfast. And Gerard Doyle's narration complements Neville's taut, sinister, smart, and suspenseful story perfectly. Collusion is a feast for thriller fans.

Stuart Neville is the author of Ratlines and the Belfast series—The Ghosts of Belfast, Collusion, Stolen Souls, and The Final Silence. The Ghosts of Belfast won the 2010 Los Angeles Times Book Prize and the Spinetingler Award for best first novel and was a finalist for the Macavity, Barry, and Anthony Awards. Stuart has taught at Trinity College in Dublin and appeared on the Late Late Show with Craig Ferguson. He lives in Belfast.