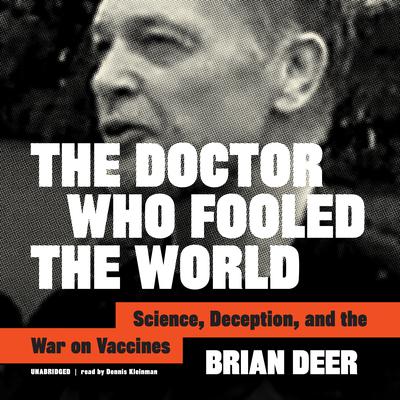 The Doctor Who Fooled the World: Science, Deception, and the War on Vaccines

The true story of Andrew Wakefield—the man behind the false link between the MMR vaccine and autism—and the conspiracy that fueled a global epidemic, from the prize-winning journalist who broke the story.

From San Francisco to Shanghai, from Vancouver to Venice, controversy over vaccines is erupting around the globe. Fear is spreading. Banished diseases have returned. And a militant “anti-vax” movement has surfaced to campaign against children’s shots.
But why?

In The Doctor Who Fooled the World, award-winning investigative reporter Brian Deer exposes the truth behind the crisis. Writing with the page-turning tension of a detective story, he unmasks the players and unearths the facts. Where it began. Who was responsible. How they pulled it off. Who paid.

At the heart of this dark narrative is the rise of the so-called “father of the anti-vaccine movement”: a British-born doctor, Andrew Wakefield. Banned from medicine, thanks to Deer’s discoveries, he fled to the United States to pursue his ambitions, and now claims to be winning a “war.”

In an epic investigation spread across fifteen years, Deer battles medical secrecy and insider cover-ups, smear campaigns and gagging lawsuits, to uncover rigged research and moneymaking schemes, the heartbreaking plight of families struggling with disability, and the scientific scandal of our time.

“At a time when the World Health Organization lists ‘vaccine hesitancy’ as one of the top ten threats to global health, this stunning work sounds an urgent message and demonstrates the essential role of investigative journalism in uncovering the truth.” —Foreword Reviews
“Riveting…Readers who love a good debunking will find Deer’s narrative logical, exciting, and enraging.” —Publishers Weekly
“Written with the meticulousness of a journalist determined to find out the truth and the pulse-pounding pacing of a thriller, The Doctor Who Fooled the World is a profoundly important book.” —Steve Silberman, New York Times bestselling author

Brian Deer is a multi-award-winning investigative reporter, best known for inquiries into the drug industry, medicine, and social issues for the Sunday Times of London.