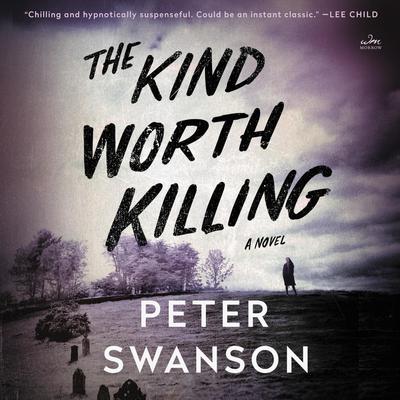 The Kind Worth Killing: A Novel

A devious tale of psychological suspense so irresistible that it prompts Entertainment Weekly to ask, “Is The Kind Worth Killing the next Gone Girl?” From one of the hottest new thriller writers, Peter Swanson, a name you may not know yet (but soon will), this is his breakout novel in the bestselling tradition of Paula Hawkins’ The Girl on the Train—now a major movie directed by Agnieszka Holland.

In a tantalizing set-up reminiscent of Patricia Highsmith’s classic Strangers on a Train… On a night flight from London to Boston, Ted Severson meets the stunning and mysterious Lily Kintner. Sharing one too many martinis, the strangers begin to play a game of truth, revealing very intimate details about themselves. Ted talks about his marriage that’s going stale and his wife Miranda, who he’s sure is cheating on him. Ted and his wife were a mismatch from the start—he the rich businessman, she the artistic free spirit—a contrast that once inflamed their passion, but has now become a cliché.

But their game turns a little darker when Ted jokes that he could kill Miranda for what she’s done. Lily, without missing a beat, says calmly, “I’d like to help.” After all, some people are the kind worth killing, like a lying, stinking, cheating spouse. . . .

Back in Boston, Ted and Lily’s twisted bond grows stronger as they begin to plot Miranda's demise. But there are a few things about Lily’s past that she hasn’t shared with Ted, namely her experience in the art and craft of murder, a journey that began in her very precocious youth.

Suddenly these co-conspirators are embroiled in a chilling game of cat-and-mouse, one they both cannot survive . . . with a shrewd and very determined detective on their tail.

Peter Swanson is the author of several novels, including The Kind Worth Killing, winner of the New England Society Book Award and finalist for the CWA Ian Fleming Steel Dagger; Her Every Fear, an NPR book of the year; and Before She Knew Him. His books have been translated into thirty languages, and his stories, poetry, and features have appeared in Asimov’s Science Fiction, Atlantic Monthly, Measure, The Guardian, the Strand Magazine, and Yankee Magazine.