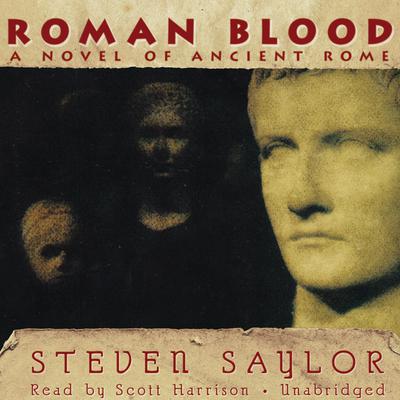 In Rome, 80 BC, on a warm spring morning, Gordianus the Finder receives a summons to the house of a then-unknown young advocate and orator, Cicero. Ambitious and brilliant, the twenty-six-year-old Cicero is about to argue his first important case. His client is a wealthy farmer, one Sextus Roscius of the town of Ameria, who stands accused of the most unforgivable act in Ancient Rome: the murder of his father.

Hired by Cicero to investigate the charges, Gordianus sets out to discover the truth in a case—and a society—rife with deceit, betrayal, and conspiracy. As he draws nearer to the truth, the conspiracy looms ever larger until Gordianus begins to perceive the hand of the dictator Sulla himself. Playing for stakes much higher than he bargained for, Gordianus finds that not only is he himself endangered, but so are all those around him.

“Saylor puts such great detail and tumultuous life into his scenes that the sensation of rubbing elbows with the ancients is quite uncanny.”  —New York Times Book Review
“Steven Saylor’s engrossing series of popular novels centered around Gordianus the Finder—a kind of Roman Sherlock Holmes.” —Wall Street Journal
“Saylor has acquired the information of a historian but he enjoys the gifts of a born novelist.” —Boston Globe
“Saylor evokes the ancient world more convincingly than any other writer of his generation.” —Sunday Times, London
“From the arrival of an articulate slave on the doorstep of sleuth Gordianus to the riveting re-creation of an actual oration by Cicero, Saylor’s remarkable first novel takes the reader deep into the political, legal and family arenas of ancient Rome, providing a stirring blend of history and mystery, well seasoned with conspiracy, passion and intrigue…a story greatly enhanced by its vivid characters…A classic historical mystery, in every sense.” —Publishers Weekly
“A modern master of historical fiction.” —USA Today
“Gripping…A combination of Hitchcock-style suspense and vivid historical details.” —Pittsburgh Post-Gazette
“Saylor’s evocation of ancient Rome is vivid and realistic. Within its compelling story, one tours Roman life from bottom to top in what is both good history and good mystery…A novelist whose future work will be worth reading.” —Austin Chronicle
“The detail is meticulous.”  —Archaeology Magazine